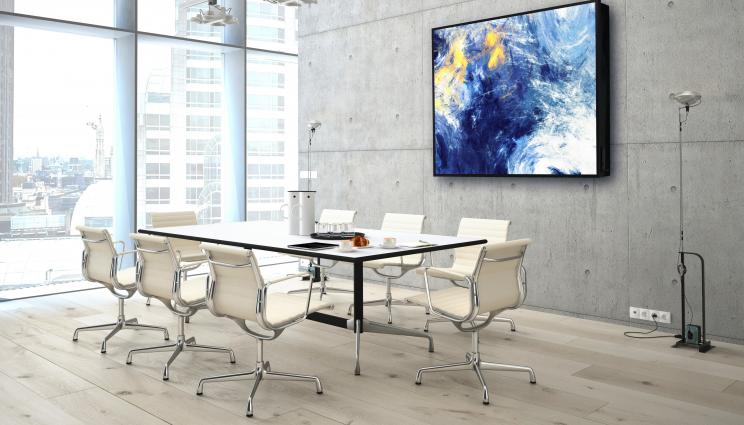 Art with a purpose: LLNL and startup company imagine the future of indoor carbon capture

Whether you’re busy at work or lounging around at home, indoor air quality probably isn’t anywhere on the list of things on your mind. But numerous studies have shown that the buildup of carbon dioxide in environments such as office buildings, schools and homes can lead to increased health issues and a decrease in productivity, decision-making and cognitive performance.

A new collaboration between Lawrence Livermore National Laboratory (LLNL) scientists and Silicon Valley-based biotech startup company Artveoli aims to clear the air indoors and improve health by combining CO2-devouring photosynthetic algae and LLNL’s carbon capture microcapsules into a flat panel device disguised as a work of digital or printed art. Designed originally for use in power plants, the microcapsules contain a sodium carbonate solution that can suck CO2 from the atmosphere. The resulting reaction produces sodium bicarbonate, also known as common household baking soda. The microcapsules are being explored for carbon capture in a host of other industries, including beer-making.

"We knew from the beginning that this technology was unique," said LLNL principal investigator Congwang Ye. "In carbon capture, hazardous chemicals are often used to react with and absorb CO2. Our material doesn’t allow direct exposure of the chemicals to the surrounding environment, which is a big plus compared to traditional carbon capture technologies. It also needs to be agile in design. Because ours is more material-based, with each capsule behaving like a mini reactor and storage unit, there’s a better chance of getting it to the right scale for this application."

The collaboration with Artveoli stems from Ye’s experience in the Department of Energy’s Energy I-Corps, a program that encourages scientists to work with industry mentors to discover if Lab-developed technologies can be applied to unexplored business sectors.

Artveoli’s founder and CEO Alina Adams started the company in 2015 with a vision of creating a product that could generate fresh air indoors after researching the impact CO2 buildup has on people in enclosed spaces. Adams said she saw an opportunity for creating a naturally based method for carbon capture, using photosynthesis not only to absorb CO2, but also produce pure oxygen, all in a device that could be hung on walls where people spend the most time.

Artveoli’s existing flat panel prototype incorporates algae arranged in a layer of microfluidic biochips and powered by a panel of LED lights. Because algae can only absorb a certain rate of CO2, the device needed a non-toxic, efficient way to suck up the excess carbon from the air that algae couldn’t process alone.

"We thought, ‘what if we added technologies into our unit to improve performance?’" Adams said. "There are a lot of challenges to get through to test the integration process, but the objective is to develop a prototype that works with the sorbent capsules to take into manufacturing. A lot of what we did with efficiency was focused on surface-to-volume ratio (of carbon capture), and that is something the capsules excel at."

In 2018, LLNL and Artveoli signed a cooperative research and development agreement (CRADA) and received a grant through the Department of Energy’s Technology Commercialization Fund to bring the technology to market. The project kicked off in February and is in the design phase. LLNL and Artveoli researchers will share a collaborative space in the Lab’s Advanced Manufacturing Laboratory, where they co-develop and jointly test a new system design.

"We’re very excited to be a commercialization partner for this technology and we’re looking forward to working with the team," Artveoli’s Adams said. "They have tremendous resources here, and we’re looking forward to bringing this technology into our units and to the market. There are multiple opportunities in different fields; in homes, offices, schools and hospitals, where indoor air quality is hugely important."

LLNL’s Ye said he is working with Artveoli engineers to test the microcapsules’ biocompatibility with algae, characterizing the materials that make up the capsules to find a formulation that will work, and determining how the two technologies would best be combined in a tight space. Ye said he expects to have a prototype and file a joint patent with Artveoli soon.

Since each panel would require somewhere on the order of hundreds of thousands of microcapsules, Ye said the enterprise will be a test for mass producing the microcapsules through a process called IDEA (In-air Drop Encapsulation Apparatus), which would likely be licensed out and done by a third party.

"The key challenge is integration," Ye said. "This is not something we’ve done before. We’re trying to take materials made for a power plant and design it for organisms in a residential unit, where they could come in contact with humans and animals. Another challenge is the capability to provide material. The IDEA system is a key factor for success. You really need to keep mass production in mind. It’s going to be needed. We don’t want to be stuck with something that can only be used on a small scale in the lab."

Researchers said they are hoping to develop the first-generation devices in 2020, depending on the speed of the integration process.