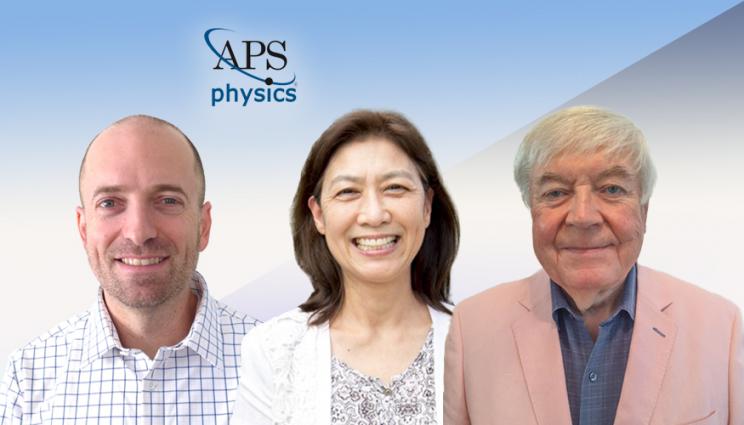 Three Lawrence Livermore scientists have been honored with the 2020 John Dawson Award for Excellence in Plasma Physics Research from the American Physical Society. From left: Steven Ross, Hye-Sook Park and Dmitri Ryutov.

“It is a great honor to have received this award,” Park said. “I truly appreciate all the team members and the fact that our devotion to great science has been recognized. I am thrilled to be a part of the work that solved a small piece of puzzle of supernova explosions.”

The award recognizes nearly a decade of the team’s work in frontier laboratory astrophysics,

encompassing plasma physics theory, large-scale numerical simulations and experiments on some of the world’s premier high energy laser facilities: LLNL’s National Ignition Facility (NIF), the Gekko-XII laser at Osaka University, the Omega and EP lasers at the University of Rochester and the Large Plasma Device at the University of California, Los Angeles.

“The idea of generating collisionless shocks on NIF was proposed 10 years ago. It took a combination of improved physics understanding and new diagnostic capabilities to make this project successful,” Ross said. “The Laboratory has been incredibly supportive of this work over the years and it is very satisfying to be recognized by the external community. It really highlights the Laboratory’s commitment to excellence in HED science. I find it very exciting that we can use the world’s largest laser to create centimeter-scale plasmas that are relevant to astrophysical phenomena spanning light years.”

Collisionless shocks have been the topic of intense scientific interest for more than a half-century. They are a fixture in astrophysical plasmas and are believed to generate and amplify magnetic fields in the universe and accelerate particles as a source of cosmic rays in a variety of objects, including colliding galaxies, supernova explosions and gamma ray bursts.

“Understanding astrophysical collisionless shocks in a laboratory has been a long and challenging journey,” Park said. “Our success was made possible by integrating the efforts of theorists who provided the dimensionless scaling from astrophysics to laboratory, of simulations that provided microscopic details of the plasma interactions and novel experiments that measured the signature of shock formation and their products. Our work on NIF was unique and rewarding, delivering the most notable results.”

“Being a theorist, I still find it most enjoyable to work on those projects where theory is closely coupled to an ongoing experiment and helps in the decision making,” added Ryutov. “It was a great privilege for me to work with outstanding LLNL experimentalists Hye-Sook Park and Steven Ross, and the whole NIF team. It is quite gratifying that, in collaboration with our colleagues from other institutions, we have made one more step toward a better understanding of the processes driven by supernova explosions and other energetic events occurring in the universe.”