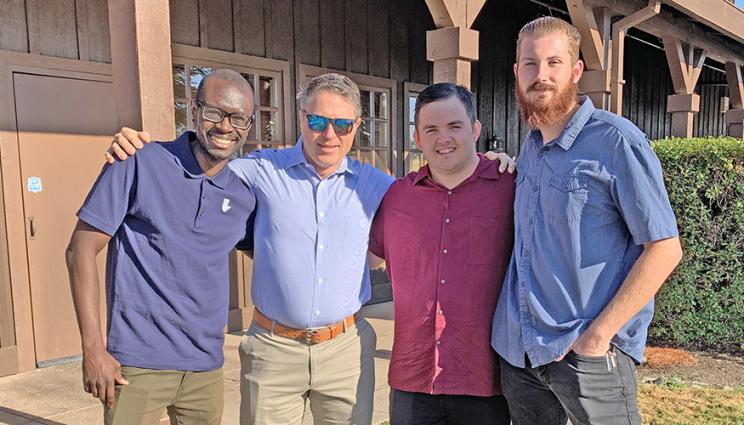 New Lawrence Livermore National Laboratory (LLNL) Machinist Apprentice Program graduates, from left, Kwadwo Kumi-Amankwah, Jorge Dalmau, Sean Ziegler and Kyle Parsons were honored for their achievements during a ceremony in Livermore on Aug. 18. All four graduates of the four-year apprenticeship will continue working at LLNL as full-time machinists.

That process began a four-year journey that concluded on Aug. 18, where he and three fellow apprenticeship program graduates accepted their state-certified journeyman certificates, marking their graduation from the program and transition to full-time jobs at LLNL. For Kumi-Amankwah, who will be a senior machinist in NIF Target Fabrication, the moment was “pretty surreal.”

“I’m just feeling a lot of gratitude,” he said. “This is something I really want to be.”

Even a power outage on a 100-degree day in Livermore couldn’t dampen the graduates’ enthusiasm for the event, as veteran Lab machinists, past apprentices, supervisors, retirees and the graduates’ families gathered to honor the group’s accomplishments.

“It’s amazing,” said graduate Kyle Parsons, who came to LLNL as an intern right after attending Granada High School. “It was very long, but (it went by) very fast. I met so many great people along the way and made some great friendships.”

The graduates were presented with their journeyman certificates by Machinist Apprentice Program Manager Jason Carroll, who emceed the event. Engineering Directorate Senior Superintendent Randy Pico thanked the apprentices and their families for their commitment and congratulated graduates on joining a long “legacy of success.”

“Engineering’s heart and soul is in manufacturing — it has been since Day One and it will always be important,” Pico said. “To the families of these graduates, thank you for supporting them in this endeavor. It wasn’t easy; no doubt about it.”

“The things we do in our machine shops and in the Manufacturing Engineering Section are very unique,” Spadaccini said. “If we can’t make high-quality components for our programs, our programs are not successful. You are the core of that, and you’re extremely important to the Laboratory and to the national security of the United States, and you really should take pride in that.”

In addition to receiving his certificate, graduate Jorge Dalmau also was handed an award for outstanding achievement named for Al Diaz, a retired Lab machinist. Diaz played a critical role in the apprentice program and attended for the event.

Dalmau, who has a business degree but “didn’t want to work in a cubicle” and instead built America’s Cup racing boats, said he learned of the apprenticeship program while taking manufacturing classes at Laney College.

“It went by quickly,” Dalmau said of the program. “I don’t have the words to describe it right now, but I’m feeling a real sense of accomplishment.”

Graduate Sean Ziegler said he became an apprentice after earning an associate’s degree in one year through the Engineering Technology Program at Las Positas College, which counts LLNL as a partner. Zeigler said he was “still in shock” at completing the program and beginning a career in the Lab’s Special Materials and Machining Facility that will provide for his family and young son.

“I’ve grown a lot the past four years and I’m hoping to keep growing,” Ziegler said. “I’m very thankful for everyone who has helped me along the way — I couldn’t have done it without them. I’m thrilled about how far I’ve come and looking forward to the future.”

The Lab’s Machinist Apprentice Program dates to 1954, just two years after LLNL’s founding. Since then, more than 160 apprentices have graduated from the program, and most have stayed on as full-time Lab machinists.

Former Manufacturing Section Leader Mike Prokosch, who began his career at LLNL as an apprentice, discussed the “rich history” of the program and advised graduates to enjoy the start of their path as journeymen and a day they would never forget.

“You’ll continue to learn, and the great thing is, you’ll be at the Lab, you’ll be surrounded by great people who are there to help you grow,” Prokosch said. "You’ll get the technical challenges that the Lab has to offer — which are many — and you’ll have equipment to work with that’s going to take you to the next level. All you have to do is (take) step after step on your journey and you’ll get there."

“This apprenticeship gives you a really good foundation in work ethic,” Baser said. “Pay that work ethic forward because that ‘gray tsunami’ is coming … There are supervisors being promoted, management that are retiring and they’re looking for somebody to take that next step.”

Seugling congratulated graduates on joining a “big family” while the Lab undergoes an important transition.

“We’re buying new equipment, we’re expanding our capabilities, we’re doing a lot of new things,” Seugling said. “We’re also talking about new technologies, so the apprentices, as they come out, are going to take that and run with it.”

“During these years, you had to sacrifice a lot, and so did your families,” Greene added. “I’m sure there were long hours during the day, in the evenings and on weekends. A lifelong learning event is important, and you should be very proud of yourselves.”

An open forum followed the presentation, where Lab supervisors and current and past apprentices offered up remarks and well wishes to the group. For more on the Machinist Apprentice Program, visit the web.