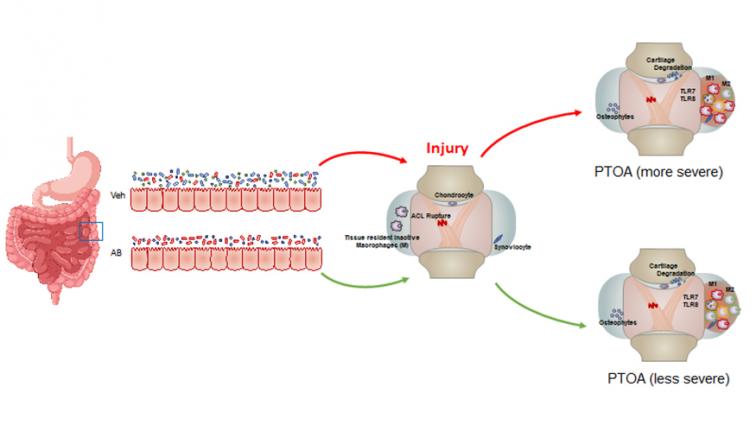 Results indicate that treatment with the antibiotics prior to a severe articular injury slows down the development of post-traumatic osteoarthritis (PTOA) by enhancing the healing capabilities of the immune response.

Tearing an anterior cruciate ligament (ACL) can be an excruciatingly painful injury. Nearly 50 percent of these patients will develop a secondary form of osteoarthritis, deemed post-traumatic osteoarthritis (PTOA).

Researchers from Lawrence Livermore National Laboratory (LLNL) and the UC Davis Medical Center have found that treatment with antibiotics prior to the injury could reduce inflammation in the injured joint and slow the progression of PTOA. Specifically, they examined how depletion of the gut biome with antibiotics prior to injury affects the development of osteoarthritis (OA) following a traumatic joint injury.

The research appears in the International Journal of Molecular Sciences.

OA is a painful and debilitating disease characterized by the chronic and progressive degradation of articular cartilage. Inflammation and re-occurring injury can contribute to the progression of PTOA.

Previous studies suggested that changes to the gut microbiome could reduce OA inflammation levels, but those studies have focused on factors at the time of injury or shortly after. Very little is known about the effects of gut biome changes prior to injury on PTOA development.

The researchers used a chronic antibiotic treatment regimen in mice for six weeks prior to ACL rupture. A microscopic examination six weeks after the injury showed more robust cartilage staining on the antibiotic-treated mice than the untreated controls, suggesting slower disease progression.

“What was surprising was that the mice pre-treated with antibiotics exhibited reduced levels of inflammation, and that the immune cells present in the joints were macrophages (M2) that are associated with healing,” said LLNL postdoc and lead author Melanie Mendez.

Injured joints also showed a significant decrease in the expression of inflammatory genes, consistent with a reduction in inflammation. The results show that this particular antibiotic regime had a beneficial effect on the health of injured and uninjured joints.

Studying the effects of medication administered before an injury is important because, clinically, most concerns are centered on side effects from co-administration.

Antibiotics are widely prescribed to teens and young adults who may be active in sports and therefore more susceptible to joint injuries. According to the CDC, in 2016, 64.9 million oral antibiotic prescriptions were issued to people under the age of 20, the equivalent of 790 per 1,000 people; therefore, gut dysbiosis (a microbial imbalance) may be more common than expected in young athletes suffering an articular injury. In this scenario, the gut dysbiosis may provide a benefit to these young people, if they suffer a joint injury. Future studies will address mechanistically the relationship between microbial diversity in the gut and tissue repair.

As the population of the U.S. ages there will be an increase in PTOA cases; studying how antibiotics modify PTOA phenotypes will be helpful to finding preventive treatments in the future for both young and old patients, Loots said.

However, further research is needed to determine if short-term antibiotic treatment can prevent PTOA or if antibiotic treatment after injury would have the same effect. The study highlights the importance of how systemic and local factors present prior to injury can significantly impact how bodies heal and respond to trauma as well as the importance of the gut biome in modulating PTOA.

This work was funded by the Laboratory Directed Research and Development program.