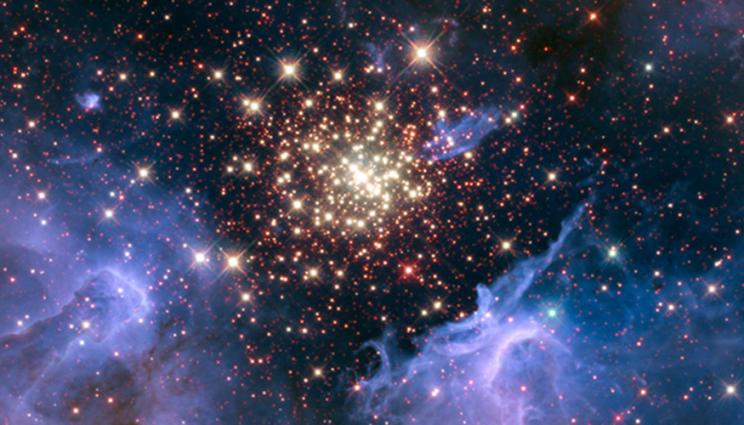 A region of star births nestled within the ingredients needed for star formation: clouds of interstellar gas and space dust. The nebula here resides 20,000 light-years away in the constellation Carina. It contains a central cluster of huge, hot stars. Image courtesy of Hubble Heritage Team/NASA/ESA

Interstellar dust is an important component of our galaxy. Condensed in the outflow of dying stars, it is used to study stellar evolution, nucleosynthesis and the chemical development of the galaxy.

Although dust only presents about 1 percent of the mass in the interstellar medium (ISM), it carries a large fraction of the elements heavier than helium, including the elements that form terrestrial planets and are essential for life.

Gaining increased knowledge about its composition and lifecycle is valuable. A Lawrence Livermore National Laboratory (LLNL) scientist and international collaborators are doing just that. The team recently dated micrometer-sized silicon carbide stardust grains extracted from the Murchison meteorite and found they formed anywhere from 1.5 million to 3 billion years before the formation of our solar system. The research appears in the Proceedings of the National Academy of Sciences.

Stardust grains are the oldest datable solid samples available for study in the laboratory and provide invaluable insight into the presolar chronology of our galaxy.

Previous studies showed that stardust grains formed up to 1 billion years prior to the formation of our solar system.

“However, the finding that roughly 8 percent of the analyzed grains are actually older than 1 billion years is definitely surprising,” said LLNL scientist Reto Trappitsch, a co-author on the paper. “So far, we thought that 1 billion years is about the maximum possible age such a small grain might survive the harsh conditions in the interstellar medium, however, it seems that we have to revise our image. This result is really great though, since it means that by analyzing stardust grains for their nucleosynthetic signatures, we actually study a broader time range than we previously expected.”

Dust lifetime estimates mainly rely on sophisticated theoretical models. These models, however, focus on the more common small dust grains and are based on assumptions with large uncertainties. These uncertainties mainly pertain to the time the dust spent in various regions of the ISM, which exhibit different rates of dust destruction through sputtering and collisions in supernova shock waves. Most of these models currently predict an average lifetime of interstellar grains on the order of 100 million years. However, more recent models and a few models for larger grains predict much longer survival times in the ISM of up to billions of years.

In the new research, the team was able to better date the dust using neon (Ne) isotopes imbedded in the grain that were produced by galactic cosmic rays. Based on the isotopic measurements, researchers said some of the grains could be the end products of stars originating in an enhanced star formation episode. The isotopic record in these grains further allowed the team to study the stars that made those grains and the isotopic composition of galactic chemical evolution.

“Looking through a telescope allows us to study the elemental composition of stars today,” Trappitsch said. “Looking at stardust grains allows us to probe the isotopic composition of the solar neighborhood more than 4.5 billion years ago. Using these two methods will help us better understand how elements form in different stars and how they evolve over time in the Milky Way.”

The dates provide a framework for determining that the solar neighborhood was a diverse place, with stars of various evolutionary stages. Many of the parent stars of these stardust grains were even more evolved than our solar system.

“All this information helps us to not only better understand stellar nucleosynthesis and galactic chemical evolution, but to get a more complete picture on how the material from which the solar system (and ultimately everything we see around us) formed and came together in the first place,” Trappitsch said.

Other institutions include The Field Museum of Natural History of Chicago, the University of Chicago, Washington University, Harvard Medical School, Institute of Geochemistry and Petrology, Eidgenössische Technische Hochschule (ETH) of Switzerland and The Australian National University. The work was funded by LLNL’s Laboratory Research and Development program.