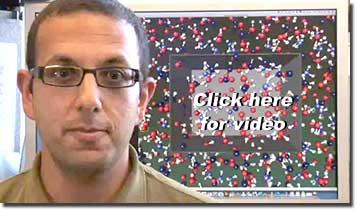 Amino acids could be produced within impacting comets, bringing life to earth

LIVERMORE, Calif. — Life on Earth as we know it really could be from out of this world.

New research from Lawrence Livermore National Laboratory scientists shows that comets that crashed into Earth millions of years ago could have produced amino acids – the building blocks of life.

Amino acids are critical to life and serve as the building blocks of proteins, which are linear chains of amino acids.

In the Sept. 12 online edition of the journal Nature Chemistry , LLNL’s Nir Goldman and colleagues found that simple molecules found within comets (such as water, ammonia, methylene and carbon dioxide) just might have been instigators of life on Earth. His team discovered that the sudden compression and heating of cometary ices crashing into Earth can produce complexes resembling the amino acid, glycine.

Origins of life research initially focused on the production of amino acids from organic materials already present on the planet. However, further research showed that Earth’s atmospheric conditions consisted mainly of carbon dioxide, nitrogen and water. Shock-heating experiments and calculations eventually proved that synthesis of organic molecules necessary for amino acid production will not occur in this type of environment.

"There’s a possibility that the production or delivery of prebiotic molecules came from extraterrestrial sources," Goldman said. "On early Earth, we know that there was a heavy bombardment of comets and asteroids delivering up to several orders of magnitude greater mass of organics than what likely was already here."

Comets range in size from 1.6 kilometers up to 56 kilometers. Comets of these sizes passing through the Earth’s atmosphere are heated externally but remain cool internally. Upon impact with the planetary surface, a shock wave is generated due to the sudden compression.

Shock waves can create sudden, intense pressures and temperatures, which could affect chemical reactions within a comet before it interacts with the ambient planetary environment. The previous general consensus was that the delivery or production of amino acids from these impact events was improbable because the extensive heating (1000s of Kelvin degrees) from the impact would destroy any potential life-building molecules. (One Kelvin equals -457 degrees Fahrenheit).

However, Goldman and his colleagues studied how a collision, where an extraterrestrial ice impacts a planet with a glancing blow, could generate much lower temperatures.

"Under this situation, organic materials could potentially be synthesized within the comet’s interior during shock compression and survive the high pressures and temperatures," Goldman said. "Once the compressed material expands, stable amino acids could survive interactions with the planet’s atmosphere or ocean. These processes could result in concentrations of prebiotic organic species ’shock-synthesized’ on Earth from materials that originated in the outer regions of space."

Using molecular dynamic simulations, the LLNL team studied shock compression in a prototypical astrophysical ice mixture (similar to a comet crashing into Earth) to extremely high pressures and temperatures. They found that as the material decompresses, protein-building amino acids are likely to form.