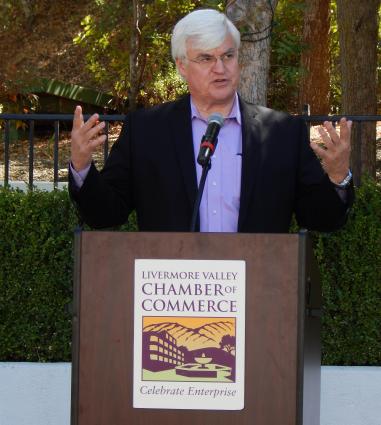 Director Parney Albright sees a day when the Livermore Valley is known as a vibrant research and development enterprise, with the Laboratory and neighboring Sandia-California serving as anchor tenants.

That's the message he delivered during a special presentation before the Chamber of Commerce Thursday at Wente Vineyards. The director served as the guest speaker for the chamber's final installment in this year's series of summer luncheons and talks.

Throughout his talk Albright highlighted the impacts the Laboratory makes to the nation as well as the local community, emphasizing its economic impact through a payroll base of $700 million and procurements of $568 million. He explained that while most people know the Lab for its work in national security, most are unaware of how that work transfers to other facets of research and development.

Albright highlighted the various facilities and capabilities at the Lab that partner with industry and academia -- from some of the world's fastest supercomputers, to the world's largest and most energetic laser, to cutting edge biological sciences and sensor capabilities and new materials developed through additive manufacturing. "We are the secret sauce that makes this country competitive," he said.

"We have a responsibility to be a part of this nation's economy. I also want us to be a vital part of the local economy."

Albright explained some of the efforts of the High Performance Computing Innovation Center, at the Lab's Livermore Valley Open Campus (LVOC), to partner with local business and industry on ways to advance economic competitiveness. He talked of new funding opportunities to bring in businesses that may establish new buildings at LVOC and partner with the Lab and Sandia.

He also emphasized the importance of continued work with the school district to promote core curricula that will educate the next generation of scientists and engineers.

When asked what the Lab or average employee may look like in 10 years, Albright said the prototype employee would be not much different from those at the Lab today. "It's someone who knows the way to make a difference is to come here to do work important to the nation."

As for the Lab, Albright reiterated his vision of a research and development enterprise, still serving the needs of the nation, whatever they may be. "We have the world's greatest facilities and the smartest people. To not put this in service to the nation would be a dereliction of our duties."

Albright also used his talk to pass along congratulations to Jay Davis, the chamber's current chair and a former associate director at the Lab, on the occasion of the 25th anniversary of the Lab's Center For Accelerator Mass Spectrometry. It was Davis' effort that got the facility up and running and helped turn it a premier user facility, Albright said. Though not in attendance, Albright also passed along congratulations to publisher Joan Seppala and the Livermore Independent , which recently celebrated its 50th anniversary.

LLNL featured as a top STEM workplace by AISES