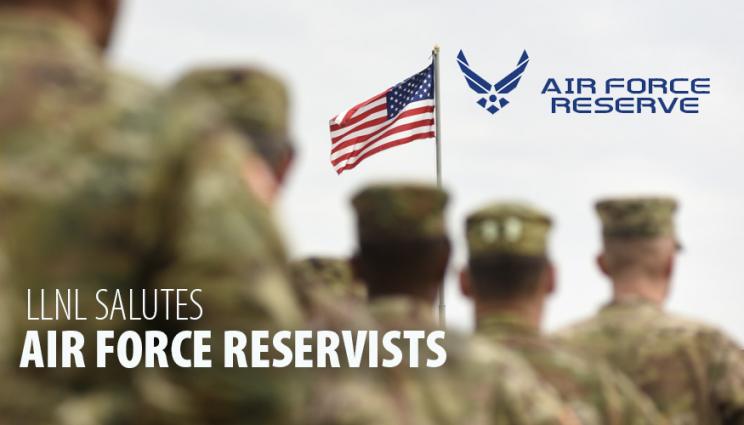 On April 14, 1948, President Harry Truman established the United States Air Force Reserve, a force comprised of people who would stand ready to serve during wartime. Today the Reserve performs 20 percent of the work in the Air Force including specialized missions such as weather reconnaissance, firefighting and personnel rescue. Lawrence Livermore National Laboratory (LLNL) is proud to have several Air Force reservists as part of the workforce.

Jela Paras, who works in LLNL’s Cybersecurity Program as a business unit security specialist, has been able to draw upon her experience as a former Air Force reservist in her current role at the Lab. She said what she learned as a reservist has been a tremendous asset to her position at LLNL.

“Being a reservist gave me the discipline and motivation to constantly improve,” she said. “I look at the purpose of my job in a bigger picture, which ensures the security of this country.”

Paras served as an Air Force reservist from 2012-2018 where her primary focus was in logistics and transportation.

She said she became a reservist to fulfill a sense of purpose in life and she knew that serving the country was one of them.

Paras said she enjoyed spending weekends reuniting with her second family — her unit — to fulfill her mission. She said being part of the military allowed her to see and experience different people from all walks of life. She particularly enjoyed learning about different cultures who treated each other as family.

“The Air Force Reserves was my second home and second family,” Paras said. “Being a reservist helped diversify my interactions with people.”

Bill Lee was not finished serving the country when he left the Air Force in 2011, so he became an Air Force reservist.

Lee, who serves as the Department of Defense (DoD) communications liaison for the W87-1 Modernization Program at LLNL, has been an Air Force reservist for 10 years and was on active duty from 2000-2011. He went back on active duty orders from 2017-2020, where he taught English at the U.S. Air Force Academy. Lee was part of the mandatory force shaping that took place from 2005-2011 and was involuntarily separated as part of that reduction in force in December 2011.

“I was not finished serving my country, so immediately bounced to the Air Force Reserves, where I will likely remain until they tell me to retire,” he said.

He said his role at the Lab is tied specifically to his experiences in the Air Force and Air Force Reserves.

“In my role with the W87-1 Modernization Program, I’m expected to leverage my knowledge of DoD/AF culture and practices to support and enhance our stakeholder communication,” he said.

Lee has been with the Lab since July 17, 2020, and in light of the current COVID-altered world, there hasn’t been much of an opportunity for him to engage with the community yet. As a reservist, in the past, he has had several opportunities to speak to junior high and high schools about military service. More directly, he is in a position to draw on his military experiences to give back to the Lab through the W87-1 program.

Ever since Donny Kavanagh was a teenager, he had a desire to serve the country in some form or fashion. It was not until later in life that he became an Air Force reservist.

“I was working at Bldg. 411 when the World Trade Towers were hit and I watched both while on-site,” he said. “I almost signed up on the 12th of September 2001. My family talked me off the ledge and I continued to work here at the Lab.”

The desire to serve never left him and when he met his wife in 2005, a former Navy military police officer, they discussed him joining the Reserves. It was not until 2012, when he knew his time was limited, he decided to join.

“My wife asked me that if I do not join, can I live the rest of my life looking back with regret not fulfilling that desire I still have,” he said. “So, at the ripe young age of 34, I signed up for the Reserves. I completed my basic training and technical school as a geospatial-intelligence analyst at 35 years old.”

Kavanagh, who served as a reservist from 2012-2018, said being a reservist has been a tremendous asset at the Lab.

“The experiences I had while being a reservist has helped me not sweat the small things and not take each day for granted,” he said. “I look to each day as an opportunity to better myself as a person and professional. And you are never too old to start new opportunities.”

He said his greatest honor was being a part of the annual changing of the flag at the Superblock at LLNL.

“I was the honorary flag-bearer, and it was a highlight of my giving back,” he said. “Being a reservist and a Lab employee, there is a lot of camaraderie with veterans. Whether you were active duty, reservist or a member of any of the armed forces, a kinship has developed that builds the community to a big family.”

Kavanagh, who is a Radioactive Hazardous and Waste Management senior field technologist and a senior certified fissile material handler, said he is grateful for the support from the Lab. “Having the Lab support veterans in such a big way is just one of the reasons – but a big reason – I love working here at the Lab.”

Col. Joe Tringe, a group leader at LLNL and an Air Force reservist, said one of his biggest achievements as a reservist was helping to launch a missile in February. Read about his role with the launch here.

He served as the final decision authority during a successful unarmed Minuteman III intercontinental ballistic missile launched from Vandenberg Air Force Base in California.

Tringe, who was on active duty from 1999-2003 in the Air Force Research Lab, Space Vehicles Directorate at Kirtland Air Force Base, said he became a reservist because he wanted to continue serving in the military.

“The Air Force Reserve allowed me to do this in a meaningful way, which was complementary to my career at LLNL,” he said.

Tringe served in the Reserve since 2004 in various organizations, including the Asian Office of Aerospace Research and Development in Tokyo, the Office of the Secretary of Defense at the Pentagon and the Space and Missile Systems Center at Los Angeles Air Force Base. He is currently assigned to the 30th Space Wing at Vandenberg Air Force Base.

“Being a reservist has provided excellent leadership experience, as well as useful knowledge of the Department of Defense processes, requirements and technologies,” he said, adding that he remains grateful for LLNL’s outstanding backing of reservists’ duties.

Tringe offers advice to anyone wanting to serve the country, either as a reservist or active duty: “Connect with others who are already serving to understand the opportunities and challenges.”