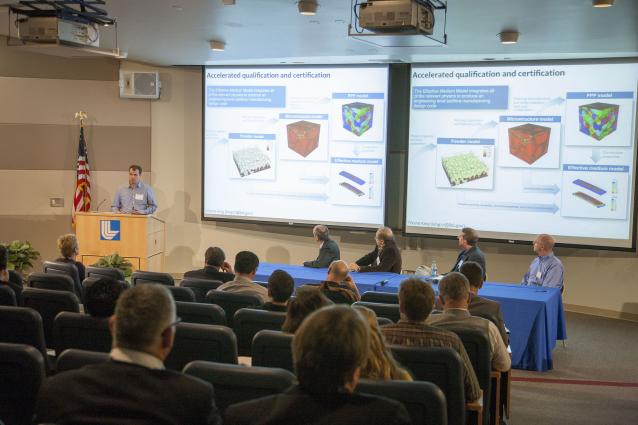 Eric Duoss of LLNL speaks during a panel discussion on "The future of Additive manufacturing." The panel was moderated by the Lab's Patrick Dempsey. Photos by Jacqueline McBride/LLNL 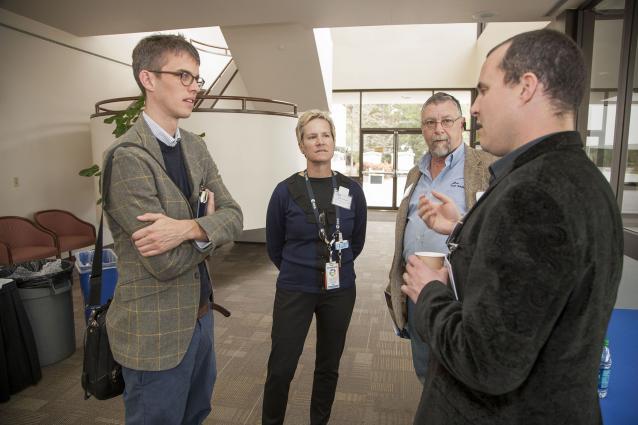 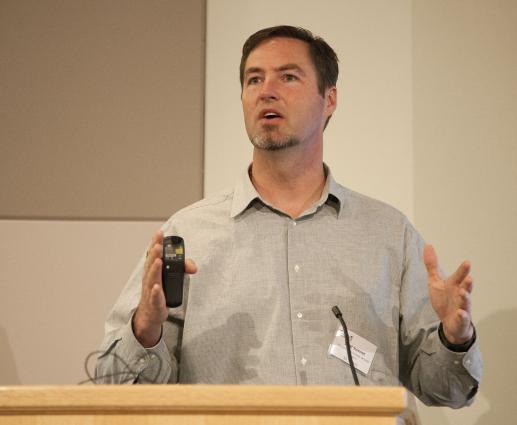 "Plastics!" That was the career advice offered to the new college graduate played by Dustin Hoffman in the 1967 film "The Graduate."

Today that would likely be "additive manufacturing" or "3D printing." That was the underlying theme to last week's "Additive Manufacturing Forum" sponsored by the California Network for Manufacturing Innovation (CNMI) and hosted by Lawrence Livermore.

"Economic security and additive manufacturing go hand in hand," said Buck Koonce, head of economic development for LLNL, in his remarks opening the daylong forum focused on the importance of advanced manufacturing to the State of California and the nation's economic prosperity.

Koonce noted that economic vitality is important to the national security at the heart of LLNL missions and that the forum "is representative of the Lab's new direction" -- making LLNL's unique science and technology capabilities and expertise available to industry to help ensure U.S. economic competitiveness.

Reminding attendees that "California has historically been a manufacturing force for the country," Kish Rajan, director of the Business and Economic Development for the Governor's Office, exhorted those in attendance to seize the "wonderful opportunity" additive manufacturing represents.

In his afternoon keynote address, Rajan said that with $230 billion in annual output, California is the largest manufacturing state in the union. But traditional manufacturing job growth has leveled off and even declined slightly in recent years. "Manufacturing has been the engine of massive job growth," Rajan said. "But where we are today is not where we want to be.

"If we're going to renew our commitment to manufacturing in California," he said, "It's clear one of the answers is additive manufacturing."

Rajan said the state is working to further encourage manufacturing by improving the regulatory climate, providing R&D tax credits and streamlining permitting processes. He challenged the notion that other states could match what California has to offer manufacturers, noting the existing high tech manufacturing base, prestigious universities and national labs in the state offer "capacity unmatched" anywhere in the country.

"It's time to build a new iteration of manufacturing in California," Rajan said. "We don't want to just be in the race, we want to lead this race; we want to define it. This is a golden opportunity for the golden state."

From science fiction to reality

Morning key note speaker Scott Summit, founder of Bespoke Innovation, said 3D printing today runs the gamut from science fiction, such as some of the research at LLNL, to consumer products, and people sometimes have difficulty making the distinction.

To illustrate his point, Summit recalled telling a group about printing a life size 3D Scarlett Johansson to sit on his coffee table, while his listeners earnestly scribbled notes, not realizing that he was joking. But the possibilities Summit discussed in his keynote address to the forum were very real.

There are misconceptions about the technology and he spends a fair amount of time explaining its limitations, said Summit, who nonetheless describes himself as an evangelist for the technology. "The value of 3D printing is not about the end product but about the research and development process."

For example, an aircraft company can use 3D printing to rapidly produce prototype parts for testing in a wind tunnel, he said, testing up to 600 parts a week where development of individual components used to take months if not years.

Advanced manufacturing provides a "completely different take on medicine," Summit said, notably the development and production of prosthetic devices for treatment or to replace lost limbs. Current methods of manufacturing and distributing prosthetic limbs cannot meet the growing global demand, he said, noting that the mass manufactured prosthetic limbs have drawbacks, such as imperfect fitting and lack of aesthetic appeal.

Three dimensional printing offers the ability to create prosthesis devices specific to the individual and more aesthetically pleasing. "Using 3D scans of the body, 3D printing can infuse the body of the individual into the creation of the product," Summit said, adding that patients are more likely to accept and use a fitted prosthesis, to which they can give a more pleasing appearance.

The portability of 3D technology offers the potential to better meet the need for prosthetic limbs. "It's not just about 3D printing, but about how you are redesigning the business model," Summit said. "The product is simply stored in digital form; there's no inventory. It's a nimble business model."

A new way of thinking

He predicted that advanced manufacturing will transform industrial design into "something more organic and open to change."

The recent availability of 3D printers for consumers has the potential to provide a more constructive and equally compelling use of computer time for children, Yonge suggested in a panel discussion on additive manufacturing success stories and innovation. "Children can use a consumer level 3D printer instead of Xbox," he said. "That's a technology that can compete with Xbox. They can start customizing design. It's a gateway to more advanced stuff.

"Children will grow up knowing how to design in 3D," Yonge said. "They'll have the desire and the need to communicate in 3D."

Betsy Cantwell of LLNL, who moderated the panel discussion, said "at Lawrence Livermore, we're working to build our own additive manufacturing for a national security ecosystem" to find new applications for the technology.

To develop these novel or "boutique" materials, LLNL has invented new processes for micro and nano-manufacturing such as electrophonetic deposition and microstereolithography, he said.

The forum concluded with a call to manufacturers and others with an interest in advanced technologies to get involved in additive manufacturing through CNMI during a panel discussion with Patrick Dempsey, LLNL's manager for Strategic Engagement, Gene Russell of Manex and Jim Watson of California Manufacturing Technology Consulting. Watson and Russell lead the California Network for Manufacturing Innovation.

The forum was broadcast inside and outside the Lab via live-stream, a first for such an event held at LLNL. Viewers were able to submit comments and questions to the panelists online. More than 160 viewers tuned in for some portion of the proceedings, which also elicited comments via social media. "As an R&D Laboratory forging new ground in advanced manufacturing, LLNL has a stake in the success of the additive manufacturing community of which we are now a part," said Dempsey after the forum. "The CNMI forum we had the privilege to host was an important step in galvanizing the representatives from government, industry and academia who make up that community to action."