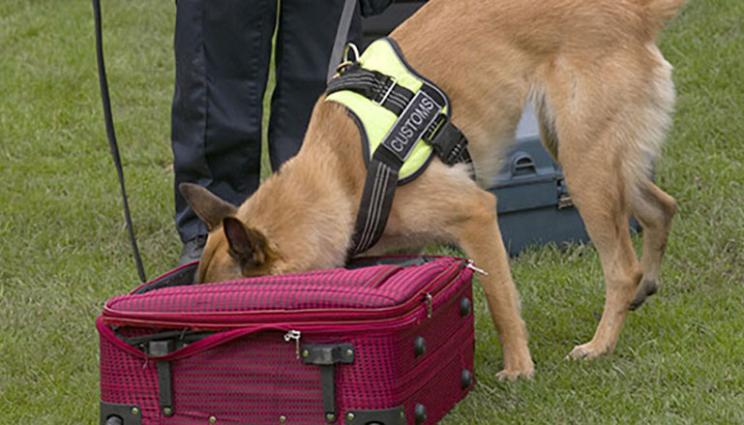 Additive manufacturing (AM) has gone to the dogs, thanks to Lawrence Livermore National Laboratory’s (LLNL’s) new approach to K-9 training materials. The process prints 3D objects that contain trace amounts of nonreactive explosives, resulting in several advantages for K-9s and their handlers. Chemist John Reynolds leads a team of LLNL scientists and engineers who recently received patents for this method and application.

Known by many names -- bomb dogs, sniffer dogs, explosives detection canines or K-9s -- these animals are valued for their reliability, trainability and highly sensitive noses. Their portability enables real-time detection in a range of national security scenarios. K-9s can detect explosives, residues, fillers and post-blast evidence.

K-9s learn to distinguish scents and targets through intensive training, which can take years at considerable expense. Reynolds has come to know the K-9 community through his work with explosives and associated safety measures. "It’s surprising how difficult this training is. Very few dogs have the aptitude for it," he said.

According to Reynolds, this community needs materials with better quality and more variety. "We have the technology to make sophisticated training aids," he said, citing LLNL’s long history of AM research and development combined with the expertise of the Energetic Materials Center. Materials chemist Alex Gash added, "Our job is to provide innovative, technically sound solutions to current problems. We can improve the existing training products."

Conventional training aids are usually presented to the dog as a powder or gel, which does not reinforce shape recognition. Simple mixing techniques do not uniformly distribute explosive material throughout the object, so the concentration level is harder to control. Simulating improvised explosives is even more problematic because mixing fuel and oxidizers together render the object unstable, unsafe and short-lived. Reynolds points out, "Training aids are mainly limited to stable explosives, but the real world is not."

K-9s are tested with explosive concentrations below 10 percent of a training aid’s weight, and dogs’ noses are sensitive enough to pick up more than just the active material. AM can uniformly and precisely disperse the explosive throughout the substrate at low concentrations. Controlled dispersion also allows fabricators to eliminate any interfering materials. "The K-9 should respond to the explosive itself, not the matrix," Gash said. "With a low-volatility matrix, the dog won’t train on the wrong signature."

With this ability to fine-tune ingredients, researchers can combine explosives with an assortment of substrates, such as plastic or clay, to simulate real-world conditions. AM’s flexibility makes many combinations possible for both traditional and improvised explosives training. "We can train dogs for a broader swath of explosive threats," Gash said. 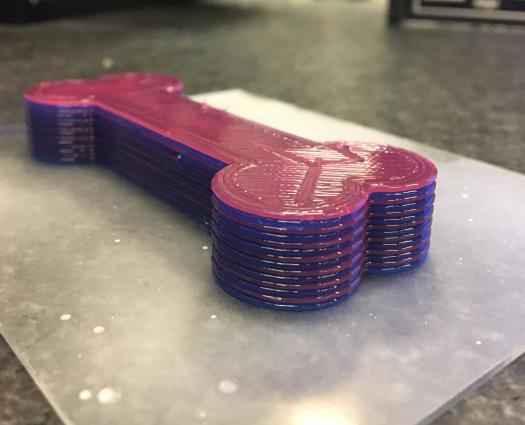 AM also makes training aids safer, particularly for simulating improvised explosives. Fuel and oxidizer layers can be sandwiched between inert layers to prevent a reaction. Gash explains, "Printing two materials without mixing them yields a more stable product that still gives an accurate signature to the animal." Stable, low-concentration training aids can be handled, stored and transported as non-hazardous materials.

The team is using multiple AM techniques, such as direct-ink writing and powder-bed binding, to optimize mixtures, stability and strength. For example, lattice structures such as base-cement, which were previously not used in the field, can now be made into training aids.

Additional AM benefits include the ability to print on demand (potentially in the training field with a portable printer), scale up and create any size or shape. Although some of the team’s proof-of-concept objects resemble Milk Bones, more realistic shapes, such as cell phones and hand grenades, are possible.

The project’s next step is securing sponsors for rigorous testing with K-9s and handlers. Ultimately, the goal is to gain approval from agencies like the Department of Homeland Security and the Transportation Security Administration to use this next generation of training aids in the field. Beyond explosives, AM technology could produce aids for dogs learning to detect narcotics, chemical weapons or other illicit materials.

In addition to Reynolds and Gash, other LLNL researchers involved in the project include Matt Durban, Michael Grapes, Ryan Kelley and Kyle Sullivan.

Engineering at LLNL
Science and Technology at LLNL