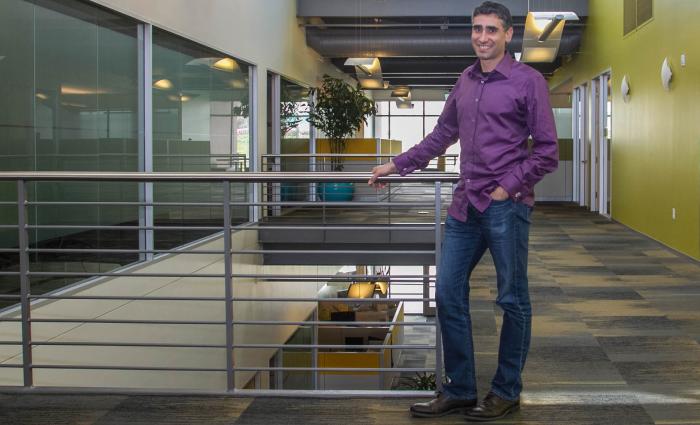 Martin Casado went from a research career at Lawrence Livermore, to a doctorate at Stanford University, to starting and selling a company and finally to his current role as a senior vice president at a multinational software giant, with products that are used by many Fortune 500 companies. Photos by Julie Russell/LLNL

Editor's note: This article is part of an occasional series about LLNL entrepreneurs

Martin Casado considers himself to be an accidental entrepreneur.

The 38-year-old Bay Area tech executive went from a research career at Lawrence Livermore National Laboratory to a doctorate at Stanford University, to starting and selling a company and finally to his current role as a senior vice president at a multinational software giant, with products that are used by many Fortune 500 companies.

Casado, whose career at Lawrence Livermore lasted from 1998 to 2003, was a successful computer scientist that worked with government agencies on classified network security issues. The entrepreneurial bug bit him at Stanford when he developed pioneering network security software and launched a startup.

Since then, he’s been credited with developing other groundbreaking technologies that radically changed how network data is exchanged and protected, strengthening cybersecurity for the computer industry, homeland security agencies and sectors such as banking, retail and health care.

Not bad for a modest researcher who turned into an influential Silicon Valley innovator.

"My career intention was not to be a successful entrepreneur, but rather to stay at the Lab," said the lanky techie with an affable personality. "But getting into Stanford changed that. If there is one thing that I learned about developing new technology it’s that you can’t give things away. If it’s totally new, you have to sell it. People don’t attach value to things that are free. That’s why I became an entrepreneur."

That thinking and the desire to further develop network security technologies in high demand led to the birth of his company, Nicira. The startup was eventually sold to Palo Alto-based VMware in 2012 for $1.26 billion, and the company made Casado its senior vice president of the Networking and Security Business Unit.

"Martin is a very smart, articulate and charismatic guy who invented technologies that can solve big problems for the computer networking industry," said Roger Werne, deputy director of Lawrence Livermore’s Industrial Partnerships Office. "His solutions arrived when the industry needed it."

Casado was born in a small town near Seville, Spain, but his family moved to Colorado when he was 1 and then to Montana, where his formative years were spent living off a dirt road. His family eventually settled in Arizona, where Casado attended Northern Arizona University in Flagstaff.

"During college, I was planning to study astronomy or physics, but clearly I wasn’t smart enough," Casado said with his self-deprecating humor. "It soon became clear that these subjects were not something I was good at, so I spent more time on the computer. I thought with computers, I could solve problems that I can’t with pen and paper."

As he worked toward a bachelor’s degree in computer science, he landed two internships at Lawrence Livermore to do atmospheric modeling at the National Atmospheric Release and Advisory Center and simulation codes with the Lab’s A Division.

Those internships eventually helped him secure a full-time position at LLNL to work on simulation codes with government agencies.

"I loved working with the simulation codes with the intelligence community," said Casado, who worked 80 hours a week at the Lab. "To this day, it’s probably the best job I have ever had."

After the Sept. 11 terrorist attacks, Lab officials asked him to be the technical lead of a program focused on assessing the susceptibility of secure networks to cyberattacks.

"I did research to determine the vulnerability of a network remotely as well as building a network that can sustain an operation that’s incredibly classified," he said. "By doing both of these things, I got a deeper appreciation for how difficult it is to secure a network."

Although Casado loved his job, he was also interested in fulfilling another dream — to earn a graduate degree. He applied for a master’s in computer science from Stanford and a Ph.D. in the same field from UC Davis so he could pursue his degree and continue working at Lawrence Livermore.

"The professor of a course I had previously taken at Stanford thought I had potential," he said. "So he moved my application to the Ph.D. pile and I was accepted. He took a big risk on me and it worked out well after I graduated."

There was one catch though. Stanford didn’t allow doctoral students in his program to study and work full-time. So it was decision time.

"Leaving the Lab was not the plan because I wanted to be there forever," he said. "However, the Stanford Ph.D. computer science program was extremely difficult to get into, so I had to take advantage of that opportunity."

At Stanford, Casado’s dissertation focused on making computer networks as malleable as computer programs. Back then, data had to travel through network connections the same way a train traveled over tracks.

The algorithms for hardware in networking are solidified in hardware, he said. So instead of this, it’s more effective to have generic primitive algorithms that can be driven by software.

"My goal was to meet the networking challenges in security, mobility and scalability — things the Internet architecture wasn’t built to do," Casado said. "The Internet is great for communication, but it allows the bad guys to be your cyber neighbors. I researched how to make networking hardware more flexible and generic to move functionality into software. I focused on how to build systems that were more secure based on this new network architecture."

His discoveries led to the creation of the software-defined networking (SDN) movement and laid the foundation for the new paradigm of network visualization. SDN revolutionized how the world exchanges data and created the market for this technology.

Using SDN, Casado and his team of Stanford computer scientists developed foundational technologies such as the initial open source code for OpenFlow, a protocol that allows anyone to decouple data from a hardware network. They also developed Open vSwitch, a virtual switch that helps programmers direct data traffic over a network.

At the same time, they also founded Nicira Networks, a startup that developed computer applications for SDN and network virtualization. By using Nicira’s software, a business could rapidly overhaul the architecture of its network in a virtual plane — a boon for information technology managers who would otherwise have to reconfigure a network manually.

"We built a system that has strong guarantees and provides security in a way that you can’t do in networking today," Casado said. "Networking today is good at providing connectivity – how to get from point A to point B. It’s not good at building security walls."

That’s because all computer networks face the challenge of choosing between context or isolation — or the line between allowing computers to share everything or nothing. By shifting network connections to the virtual domain, programmers could iteratively determine which computers may request data through the network and which information a computer could access. At any given moment, networks may adapt to find just the right spot between context and isolation, a quality that makes network security responsive in real time.

"You have to assume everything is compromised at some point," he said. "Based on that notion, our technology ensures connectivity is limited for someone to get a specific job done. So even if their network is compromised, the hacker cannot get access to all the useful data because everything else is secured. The amount of damage to the network is limited."

So far in his young career, Casado has received many accolades, including being inducted into Lawrence Livermore’s Entrepreneurs’ Hall of Fame. He also received the Grace Murray Hopper Award for Outstanding Young Computer Professional of the Year; a slot on Silicon Valley Business Journal’s 40 Under 40 list; and he was featured as Business Insider’s 50 Most Powerful People in Enterprise Tech and Forbes’ Next Gen Innovators.

"All indicators point to the fact that his work is nowhere near finished," Werne said. "As the ‘startup idea guy’ with the resources of VMware, he is sure to transform the realm of computer networking innumerable times over in the coming years."

But for all his fame and fortunate, the humble accidental entrepreneur still credits Lawrence Livermore for helping launch his career and being his first love.

"I often daydream about applying to be a programmer back at the Lab for my next job," Casado said with a smile. "I love being close to science and there are very few places on the planet besides Lawrence Livermore that you can do pure scientific research."