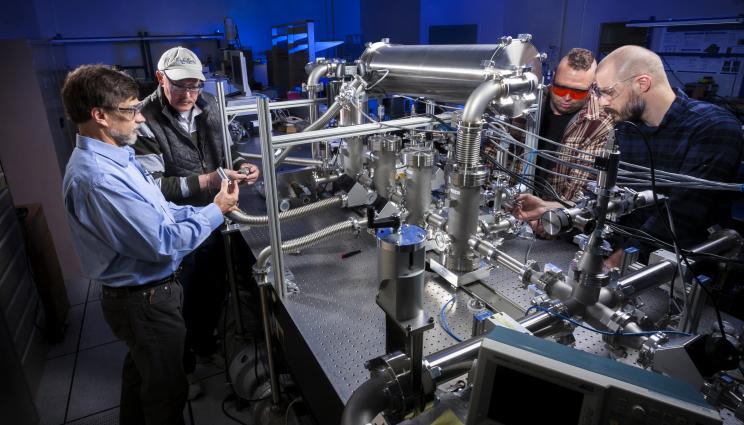 Although PLS manages the facility, located in Bldg. 194, three directorates invested in the new instrumentation (PLS, Weapons and Complex Integration and the National Ignition Facility and Photon Science), and an even broader sponsor base is currently emerging. “This is a great example of capability development in support of the entire LLNL mission space,” Létant added.

The three accelerators leverage a shared infrastructure, reducing overall construction and operating costs — including existing shielding, safety systems and a shared control center, which was modified to handle the new equipment.

Updates to the existing space turned these underground “caves” into homes for accelerators that propel charged particles at close to the speed of light.

Two decades ago, while performing Monte Carlo simulations of early neutron imaging experiments, physicist Jim Hall envisioned the potential for a more compact neutron imaging capability, which would be based on using neutrons from the deuterium–deuterium fusion reaction. With help from a team of experts and years of hard work, that vision is becoming a reality, with the neutron imaging system now in place in Bldg. 194 and its commissioning process ready to begin.

Although the accelerator-driven neutron imaging system may not appear to be “compact,” it is far smaller and less complicated than existing neutron imaging tools at other facilities — systems that are 1 to 2 miles long. LLNL’s more compact technology, where neutrons are made through deuteron bombardment, was developed to advance imaging science and support mission-relevant research at the Laboratory.

With its ability to penetrate thick, dense objects and produce radiographic images of interior features, neutron imaging has the potential to revolutionize stockpile stewardship. And as a next-generation radiographic technique, it also can be used for non-destructive evaluation of large, additively manufactured components.

According to project leader Brian Rusnak, the team also anticipates that the neutron source will enable research advancements in nuclear cross-section measurements, material assay via gamma-ray spectroscopy and experiments aimed at understanding the effects of radiation on materials and component performance.

“Creating an intense source of fast neutrons is a significant technological undertaking,” Rusnak said. “And we are interested in a wide range of experimental applications for the neutrons that will be produced.”

“Our team is excited to be part of bringing this new technology together and revitalizing LLNL’s accelerator complex,” Rusnak said. “The physics insight of Jim Hall and the program management provided by Bill McLean, combined with long-term programmatic support for the project, led to us to where we are today — on the threshold of a new chapter in non-destructive radiographic imaging.”

At the Lab’s newest electron linear accelerator, scientists are leveraging this world-class capability to study the photonuclear properties of materials. Future applications include interrogating unknown materials, producing isotopes and analyzing the nuclear properties of materials, including experiments that will support LLNL’s stockpile stewardship and nonproliferation missions.

This powerful tool, known as the Photonuclear Reactions for Isotopic Signature Measurements (PRISM) accelerator, propels electrons into a tungsten plate to generate high-energy X-rays, which then interact with the nuclei of interest. Radiation detectors measure the particles generated in the reaction.

The main portion of the PRISM accelerator was commissioned in May. As a three-year, Laboratory Directed Research and Development Program-funded project wraps up, the research team is expanding the breadth of experimental work enabled by photonuclear measurement capabilities. For example, they recently demonstrated the ability to distinguish different isotopes of uranium using delayed-neutron signatures.

“We anticipate that PRISM will be used in a wide range of experiments in the years ahead,” said physicist Robert Casperson, who looks forward to exploring how PRISM can be used to study neutron-induced reactions.

“The combination of a local, photofission-based neutron source, along with unique materials stored on site at the Lab, will enable experiments aimed at understanding neutron scattering,” Casperson added.

PRISM is a flexible tool. It is designed to accelerate electrons up to 55 million electron-volts. However, by tuning the accelerator to low-electron energy, it also can be used to study radiation effects, support radiochemistry research or better understand medical isotope production. By scanning across a range of energies, photonuclear cross sections can be determined, allowing the inference of neutron reactions on unstable nuclei.

Laser-Compton photons can be tuned or adjusted to different wavelengths, enabling researchers to detect, image and assay specific objects of interest, such as nuclear waste canisters, nuclear fuel rods and other objects that might house uranium or plutonium.

Laser-Compton light sources were initially developed by researchers at LLNL’s National Ignition Facility to serve as a high-energy, mono-energetic light source, producing gamma rays that can penetrate through lead and other thick containers, making them a useful detection tool. In 2008, the team started adapting the technology, using an X-band accelerator that boosts the speed of electrons that collide with laser photons, generating a beam that can be tuned to very precise energy levels. Its mission relevance is evolving as its capabilities expand.

Roark Marsh has been involved throughout the design work for MEGa-ray, leveraging his background in accelerator physics to explore how X-band technology can meet mission-relevant needs. “MEGa-ray is a multi-function accelerator that enables many applications,” Marsh said. “It generates a high-quality, narrow-bandwidth beam that can be used in a range of physics research.”

According to Marsh, several students have helped with experiments aimed at assessing the tool’s full capabilities. For example, one student used the instrument during his thesis work, helping to calibrate hardware used in experiments.