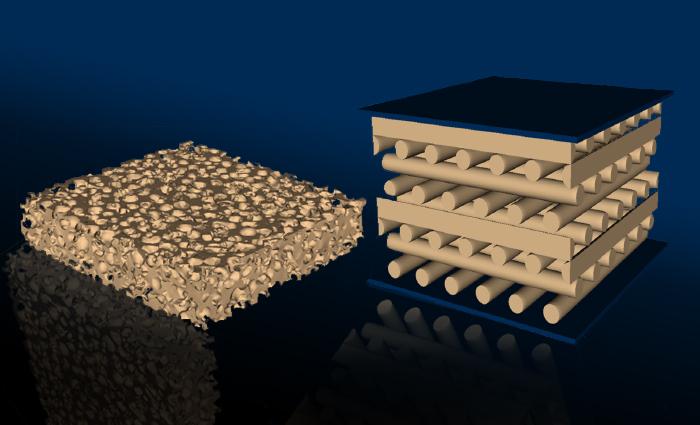 Microstructures of two different foam materials. At left, a traditional open-cell stochastic foam, and a right, a 3D printed foam with the face-centered tetragonal lattice structure.

Foams, also known as cellular solids, are an important class of materials with applications ranging from thermal insulation and shock-absorbing support cushions to lightweight structural and floatation components. Such material is an essential component in a large number of industries, including automotive, aerospace, electronics, marine, biomedical, packaging and defense. Traditionally, foams are created by processes that lead to a highly non-uniform structure with significant dispersion in size, shape, thickness, connectedness and topology of its constituent cells.

As an improved alternative, scientists at the additive manufacturing lab at LLNL recently demonstrated the feasibility of 3D printing of uniform foam structures through a process called direct-ink-write. However, since 3D printing requires the use of polymers of certain properties, it is important to understand the long-term mechanical stability of such printed materials before they can be commercialized. This is especially vital in applications such as support cushions, where the foam material is subjected to long-term mechanical stresses.

To address the stability question, the LLNL team performed accelerated aging experiments in which samples of both traditional stochastic foam and 3D-printed materials were subjected to a set of elevated temperatures under constant compressive strain. The stress condition, mechanical response and permanent structural deformation of each sample were monitored for a period of one year and, in some cases, even longer. A method called time-temperature-superposition was then used to quantitatively model the evolution of such properties over a period of decades under ambient conditions.

This study convincingly demonstrated that 3D-printed materials age slowly -- i.e., better retain their mechanical and structural characteristics -- as compared to their traditional counterparts. Interestingly, native rubber (i.e. elastomer) comprising each foam showed exactly the opposite effect -- i.e., the rubber in the printed material aged faster than the corresponding rubber used in the traditional foam.

To gain further insight into why the printed cellular material displayed superior long-term stability, the team imaged the 3D micro-structure of each foam sample with X-ray computed tomography, and performed finite-element analysis of the stress distribution within each micro-structure. They found that there is a much wider variation in local stresses within the stochastic foam, with points of extreme stress significantly higher than the maximum stress points within the more uniform 3D-printed foam.

The research appears in the April 27 edition of the journal Scientific Reports.

The group also acknowledges contributions from the National Security Campus, Missouri (formerly Kansas City Plant) where some of the early aging experiments were performed.