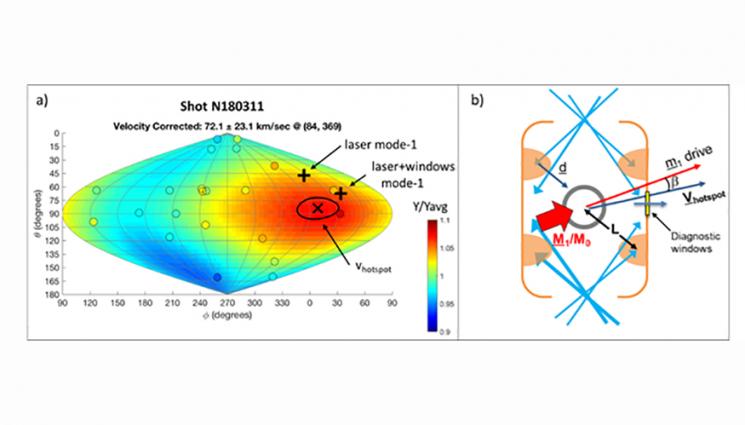 This graphic on the left shows the angular distribution of measured neutron yield versus the direction in spherical polar coordinates as a color plot. The red spot represents a region of the compressed fuel that is thinner and has more neutron yield detected. The graphic on the right shows parts of the simple model that approximates 192 beam spots and 2-3 diagnostic windows at the hohlraum wall that produce a net mode-1 in drive at the capsule that is correlated with the hotspot velocity vector direction and magnitude.

Scientists from Lawrence Livermore National Laboratory (LLNL) and the Laboratory for Laser Energetics (LLE) have described a simple 3D model in hohlraums and capsules for inertial confinement fusion (ICF) implosions. The model will assist in delivering the required implosion symmetry on layered deuterium-tritium (DT) implosions for ignition.

The results of the work remove much of the mystery associated with the variability in the observed direction and magnitude of the hot spot velocity from layered DT implosions as part of the ignition experiments.

Brian MacGowan, LLNL scientist and lead author of the paper featured in High Energy Density Physics, said the results reveal an important source for 3D asymmetry in ICF implosions and establishes the framework through which all of the known principle causes that have been discovered.

“The paper quantifies the sensitivity of the measured velocity of the compressed hotspot in cryogenically layered DT implosions, to mode-1 asymmetry of the X-ray flux at the capsule, within indirect drive hohlraums, which are laser-heated cavities that produce an X-ray radiation drive that implodes a deuterium-filled capsule,” he said.

A mode-1 asymmetry of 1 percent implies that the extremely symmetric ablation of the capsule surface by the X-rays is effectively pushing 1 percent harder in a particular direction rather than being spherically symmetric. That difference is sufficient to cause the hotspot to have a residual velocity of up to 100km/s when the imploding shell stagnates.

The paper also establishes a method to understand variation in the mode-1 asymmetry of the flux at the capsule due to variations in the measured laser performance, known target construction and expected beam and target alignment variability.

“We can relate asymmetry in laser delivery and target construction to the asymmetry of the X-ray flux at the capsule that is imploded to generate the conditions for nuclear fusion to occur,” he said. “Prior to this analysis the variability of asymmetry in the compressed hotspot was considered idiopathic, such as lacking explanation. Now it is something that can be understood and potentially controlled.”

MacGowan says it is important to understand sources of 3D asymmetry in hohlraums and capsules for ICF implosions in order to deliver the required implosion symmetry on layered DT implosions for ignition.

Poor symmetry as the shell converges leads to reduced pressure and reduced confinement in the hotspot and hence reduced neutron yield. The main diagnostic of mode-1 symmetry in the implosion of a DT layer is the velocity of the neutrons emitted from the hotspot. This velocity has been shown to be variable in magnitude and direction and is an indicator of bulk motion of the hotspot in a particular direction because of an asymmetric implosion.

“Understanding sources also enables setting appropriate specifications to fix them or implementing design mitigations ahead of the experiment such as lower loss windows,” he said.

Understanding asymmetry in a particular target construction ahead of the experiment, including shell thickness out of round at the +/-0.5 micron level, also enables the implementation of adjustments to the laser delivery at the few percent level that use laser produced mode-1 to cancel out capsule thickness asymmetry. Because the laser adjustment is a systematic change to 192 beams, the net imposed mode-1 asymmetry from the laser can be very precise and directed accordingly even when the usual variability of National Ignition Facility (NIF)-delivered power is added.

This concept was demonstrated on a recent experiment at NIF that produced almost record neutron yield. The laser was adjusted to produce an expected mode-1 asymmetry of +/-1.2 percent of the total incident X-ray flux in the right direction to compensate for a large asymmetry in the capsule thickness.

The work was done through analysis of sources of mode-1 asymmetry from laser performance and target construction together with measurements of hotspot velocity magnitude and direction from 50 DT layered implosion experiments performed since 2016. The hotspot velocity was measured by comparing the energy spectra of emitted neutrons at four different viewing angles and then deriving the average velocity of the hotspot. Read about Neutron Time of Flight (nToF) measurements here.

The work was a process of detective work to identify the sources and sensitivities based on available data. There were very few shots where a major change was made to one of the sources of mode-1 that would isolate the effect of one parameter, as the sources were usually close to the specification for that particular source.

MacGowan explains that development and validation of the model of mode-1 asymmetry benefits LLNL by allowing for the explanation of variability in the observed hotspot velocity and compressed fuel density asymmetry in terms of sources of mode-1 in the laser and target that can be derived from diagnostic measurements.

The model can be used in sensitivity studies and Monte Carlo calculations and allows easy propagation of uncertainties for different sources. For example, the impact of any correlated drift in the alignment of the NIF beams due to thermal effects in the NIF laser bays can be compared to the impact of target fabrication errors or instability in the NIF pulse generation system. They are all compared through their impact on mode-1 asymmetry at the capsule and ultimately related to the hotspot velocity they generate.