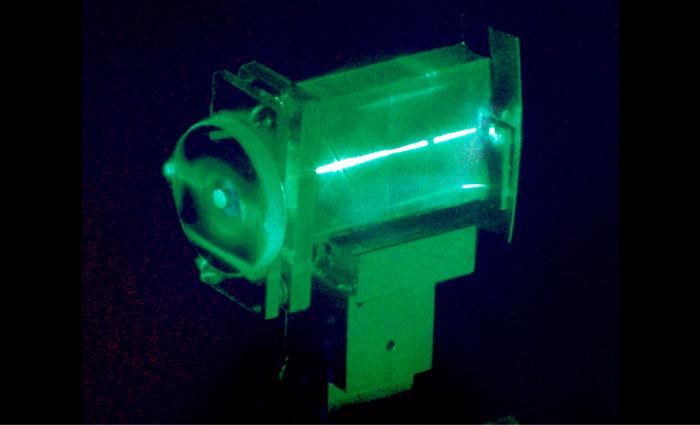 This is a real-time photo of an X-ray laser being irradiated (i.e., pumped) by the Novette laser. The green light is diffuse laser light. The bright stripe is where the focused Novette laser light irradiates a selenium foil to create the hot plasma in which the X-ray laser is created. You can't see the X rays, but they would be coming out of a small hole in the curved mirror on the left side. Photo by Gary Stone, circa 1984.

30 years and counting, the X-ray laser lives on

More than 50 years ago, when the laser was a mere 5 years old, laser physicists dreamed of the development of an X-ray laser to expand the frontier of knowledge.

Instead of trying to make a laser oscillator, they sought to highly excite elongated cylindrical plasmas that could generate intense X-ray pulses by amplifying stimulated ion emissions along their lengths. The obvious way to excite the plasma was by firing intense optical laser pulses onto a target.

Detailed models showed that pumped pulses would have to be extremely short and powerful. In a 1975 paper, LLNL’s George Chapline and Lowell Wood estimated the radiative lifetime of an X-ray laser transition would be about 10-15 times the square of the wavelength in angstroms (an angstrom is one ten-billionth of a meter). Pumping a 10-keV (0.12-nm) laser would require around a watt per atom in an unattainably short pulse. Chapline would go on to develop a workable concept for a bomb-driven X-ray laser. 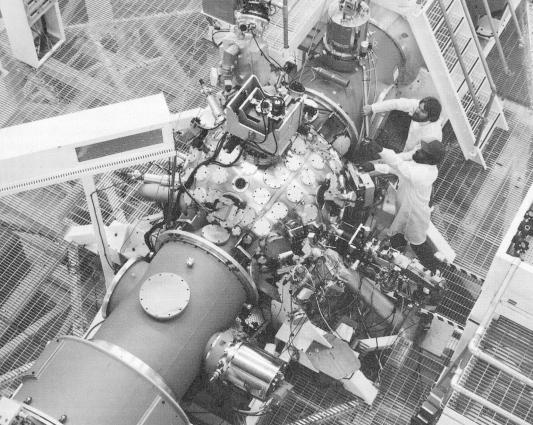 That concept turned into reality in the 1980s when Lab founder Edward Teller and Wood came up with a concept in support of the Strategic Defense Initiative (commonly referred to as "star wars"), in which X-ray lasers in ground-based and space-based systems would be used to protect the United States from any incoming intercontinental ballistic missiles (ICBMs) and submarine-launched ballistic missiles from enemy countries.

Though the X-ray laser project was eventually put on a back burner, the concept was tested when X-ray laser beams initiated by nuclear explosives were generated underground at the Nevada Test Site (NTS).

"I was working with them (Chapline and Wood) a bit because I was interested in this," said Dennis Matthews, a longtime LLNL laser experimentalist, now at UC Davis. "They needed someone to actually do the experiments. I made arrangements to test some of the ideas. They were doing underground work at NTS, and our work (at the Laboratory) was in parallel to that."

The X-ray laser eventually made it to the Laboratory in 1984 when the first demonstration of an X-ray laser occurred on Novette, the precursor of the Nova laser. Eventually the same diagnostics used for X-ray lasers have been implemented at the National Ignition Facility.

"Our group was the first one to demonstrate the X-ray laser," said Matthews, who also credited Mordy Rosen and Rich London as seminal to achieving the feat. London worked with Rosen as a postdoc at the time.

Rosen remembers working with Peter Hagelstein, now at Massachusetts Institute of Technology (MIT), who was at Livermore in the mid-1970s through the mid-1980s and wrote his dissertation on how to make an X-ray laser, using a design that would actually work. "Peter proposed the X-ray lasing scheme, and it was my job to design the target that would provide a proper plasma lasing medium. We had the right temperature, the right material and the right geometric configuration to allow lasing and it worked," Rosen said, who is now working on stockpile stewardship at the Laboratory. "This (creating an X-ray laser) was a great quest since lasers had been invented."

Lawrence Livermore researchers later developed table-top X-ray lasers to initially explore plasmas (also known as a fourth state of matter), but eventually X-ray lasers moved into a variety of fields in the material science and biology worlds by supplying detailed information about the molecular-scale structure of new and existing materials.

‘We used it for cell biology because we were trying to understand cell structure and the function of that structure," Matthews said. 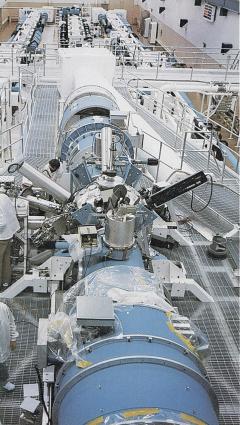 In X-ray lasers, a pulse of light strikes a target, stripping its atoms of electrons to form ions and pumping energy into the ions ("exciting" or "amplifying" them). As each excited ion decays from the higher energy state, it emits a photon. Many millions of these photons at the same wavelength, amplified in step, create the X-ray laser beam.

X-ray lasers first demonstrated on Nova and other plasma-based X-ray lasers produce "soft" X rays, which is to say their wavelengths are a bit longer than those used in medical X-rays. Soft X-rays cannot penetrate a piece of paper, but they are ideal for probing and imaging high-energy-density ionized gases. X-ray lasers are an invaluable tool for studying the expansion of high-density plasmas, making them useful for Livermore's fusion and physics programs. Basic research using X-ray lasers as a diagnostic tool can fine-tune the equations of state of a variety of materials as well.

"It was a lot of 14-hour days and shifts but it was enormous fun and probably the most creative time in my career," Rosen said.

X-ray lasers have evolved quite a bit since the 1980s. At the SLAC National Accelerator Laboratory, the Linac Coherent Light Source (LCLS) reveals never before seen structures and properties in matter and can be compiled to make movies of molecules in motion. The LCLS is the world’s first hard X-ray free-electron laser that uses ultrabright, ultrashort pulses that capture atomic-scale snapshots in quadrillionths of a second. From photosynthesis to determining the structure of proteins to exploring new ways to change the magnetic and electronic properties of an important class of electronic materials to giving scientists the right tools to investigate the extremely hot, dense matter at the centers of stars and giant planets, the LCLS has opened a door to a new class of experiments.

"I never thought we would get to that short of a wavelength," Matthews said about the LCLS. "It’s completely different than the kind of laser amplification we were doing. It does prove that you can do some fantastic molecular scale imaging."