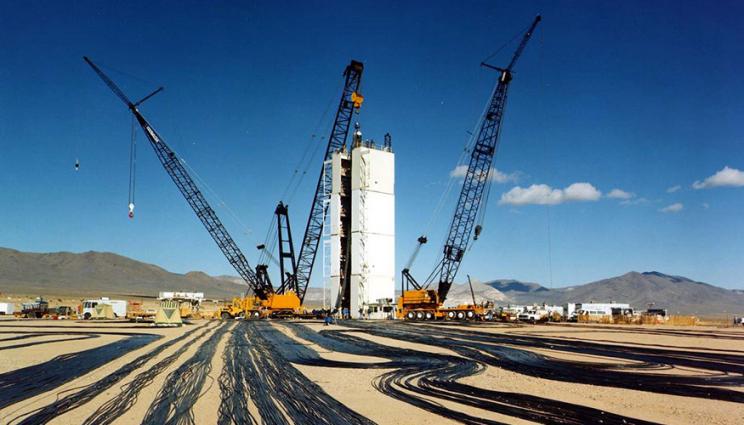 Signal cables carpet the desert floor at the Nevada Test Site in preparation for an underground nuclear test -- codenamed Icecap -- that never came to fruition. Just prior to the scheduled detonation, President George H.W. Bush announced a unilateral test moratorium. The tower that held the diagnostic rack still stands in Nevada to this day.

A blend of beautiful blue and green hues jump off the computer screen of Lawrence Livermore National Laboratory physicist Todd Hoover. The visualization is a simulation of an underground nuclear test that took place 25 years ago this day.

Hoover was a test coordinator on the experiment, code-named Hunters (sic) Trophy. As nuclear tests go, this was a relatively small explosion, less than 20 kilotons, conducted deep inside a sealed horizontal tunnel drilled into a mesa at the Nevada Test Site. After a direct flight home from the airstrip at the test site, it was business as usual for Hoover. He was already preparing for the follow-on test.

"I was shocked," Hoover said. "With the end of the Cold War, I thought the we would eventually reduce the maximum yield of tests, and I was actually working with our sponsors to prepare for that. Some other colleagues here at Livermore did see it coming, but I didn’t. We weren’t sure a design community would be needed anymore."

The end of an era and the birth of stockpile stewardship

The weapons program at LLNL was faced with an identity crisis. Not only had testing ended, but the days of designing new weapons was suddenly in the rearview mirror. The future of the Lab was uncertain, as was the approach that should be taken to maintain the U.S. stockpile without testing. Enter Vic Reis, the architect of the Stockpile Stewardship Program, which ensures the safety, security and effectiveness of the nuclear deterrent to this day.

"I was told that we needed to look at other ways of ensuring the safety, security and effectiveness of the stockpile," said Reis, who had been appointed assistant secretary of Defense Programs in the Department of Energy. "Bob Bell, who was special assistant to President Clinton and director of Defense Policy and Arms Control, asked me to get started, and to come back when we knew how we were going to do it. To be honest, we didn’t know whether it would work at the time."

To get started, Reis took the weapons program leadership from the national security laboratories and conducted a two-day strategic planning sprint. In the end, they had formulated a rough outline of how they would approach a science-based method for maintaining the stockpile. After that session, Reis gave the idea a 50 percent chance of success.

"In some ways, the biggest challenges were psychological, to get people to believe it could be done," he said. "The business model at the labs was developing new weapons frequently, competition between the labs and then testing to provide evidence of which approach was superior. We suddenly faced a situation where none of that was happening."

With the new Stockpile Stewardship Program formally established by the 1994 National Defense Authorization Act, LLNL faced a new set of challenges that would define its future. Researchers would use science alone to assess the aging stockpile and certify that weapons with refurbished components would still function as expected. Success would rely on the creation of a computational testbed to replace nuclear tests, and the development of the experimental capabilities required to underpin those simulations with real-world data.

Over the course of the next decade, Livermore would install new generations of massively parallel supercomputers and build the world’s largest and most energetic laser system, the National Ignition Facility (NIF), to enable researchers to replicate the high energy-density conditions that only occur within nuclear weapons.

The first major success of the Stockpile Stewardship Program came in 1999, when Livermore researchers completed the first ever refurbishment and certification of a nuclear warhead in the post-testing era. This work ensured that the W87 warhead could remain part of the enduring stockpile beyond 2025, and the certification without testing was a groundbreaking milestone for the new Stockpile Stewardship Program.

The first generation of ‘stewardship physicists’

Across the Lab from Hoover sits Juliana Hsu. Like Hoover, Hsu has made her career at LLNL as a weapons physicist. Unlike Hoover, who participated in four tests during his career, Hsu was hired just as testing came to an end. Her significant scientific contributions have helped ensure the safety, security and effectiveness of the U.S. nuclear stockpile. But unlike the generations that preceded her, she has never designed a new weapon for the stockpile, nor has she been involved in a nuclear test. Her career as a weapons physicist is defined by the transition to stockpile stewardship.

"When I came in, stockpile stewardship was just ramping up," said Hsu. "The mood was apprehensive, and there were lots of questions and debates about how it would work. As we advanced the computation capability, we also began to realize that we needed more of the fundamental data and experimental capabilities to verify that the calculations were correct. It became clear that we would need a deeper understanding of weapons physics to do our job without testing."

Hsu was hired into LLNL as a code physicist. Her early focus was on developing the first functioning three-dimentional code for the stockpile. As her career progressed, she helped lead a number of efforts to extend the life of aging weapon systems. She made a tremendous impact through this work, being named a Distinguished Member of the Technical Staff and climbing the ladder to now serve as deputy director of the Weapon Physics and Design Program.

Despite these career accomplishments, the modest Hsu is quick to deflect credit for her role in the success of stockpile stewardship. But it was because of researchers like her that the U.S. has been able to maintain its nuclear deterrent for a quarter century without testing.

"I came for the challenging scientific work," Hsu said. "But as I understood more about the mission, it came became more and more important to me. That was the part that was meaningful. We are responsible for keeping the deterrent viable into the future."

Weapons physicists of the future

While Hoover was in Nevada for Livermore’s last nuclear test, new hire Madison Martin was just beginning her 22-year academic journey as a 4-year-old in preschool. Hired last month, she is one of 14 design physicists hired in the past year.

Facing a completely different threat landscape than Hoover did, and stepping into a well-established science-based Stockpile Stewardship Program built on the work of researchers like Hsu, the future of U.S. security will one day fall on the shoulders of the next generation of weapon scientists like Martin.

"What attracted me to Livermore was that it offered a way for me to contribute to science that was important to the nation," Martin said. "It's very meaningful to me to be part of that, and it’s great to have experienced mentors to learn from."

Martin brands herself as a computational designer, running massive codes to better understand high-energy density physics. She will be designing and analyzing experiments on the National Ignition Facility to provide better data to underpin annual assessments of the aging stockpile.

While Martin is getting her feet wet with NIF experiments, across the Lab, Hoover examines the blue-green visualization of Hunters Trophy on his computer screen. If asked why he’s looking at that test today, he will be quick to point out that he hasn't been looking at the same simulation for the past 25 years. Nor is he reminiscing about a bygone era. He has returned to LLNL from retirement with a renewed sense of mission. He is focused on getting a better understanding of the old underground test data to help the next generation of physicists.

"Hunters Trophy was special to me, not just because it was our last test, but because of the science," Hoover said. "The results were unexpected and very exciting. We’ve effectively replaced testing with a computational testbed, and it’s only as good as the data we have. The results of this study will help the next generation of weapon physicists make modern assessments of the stockpile.

"I've had plenty of successes in my career, but when I was about to retire, I was told that I would fail at it," Hoover said with a sly grin. "And here I am. The science still fascinates me, and the mission is just as real as it was in the Cold War. It's still very important to me."

Nuclear weapons technology for a new generation of policymakers