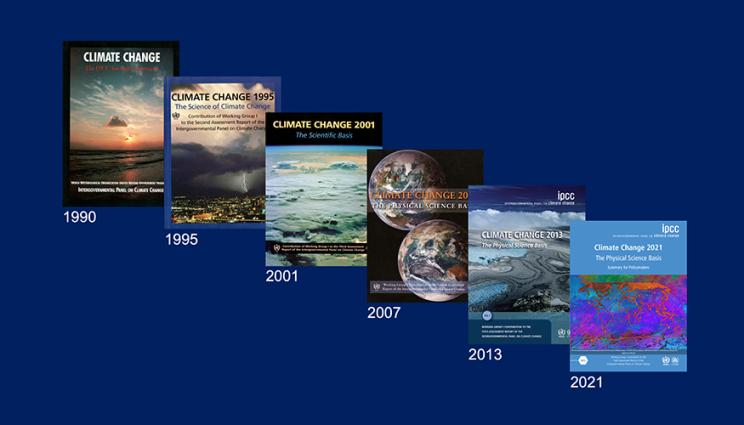 Cover pages of the six IPCC Assessment Reports, spanning the years 1990 through 2021.

2022 Gulbenkian Prize for Humanity jointly awarded to the IPCC

The United Nations (UN) Intergovernmental Panel on Climate Change (IPCC) was jointly awarded the Gulbenkian Prize for Humanity, alongside the Intergovernmental Science-Policy Platform on Biodiversity and Ecosystem Services (IPBES). The prize jury distinguished the two intergovernmental organizations for their role in developing scientific knowledge, alerting society and informing policymakers to improve decision-making to combat the dual challenges of climate change and biodiversity loss.

“On behalf of IPCC scientists who deliver the most up-to-date and robust climate change knowledge to the world’s policymakers, we are honored to receive this prominent award,” said Hoesung Lee, the IPCC chair. “Science is our most powerful instrument to tackle climate change, a clear and imminent threat to our well-being and livelihoods, the well-being of our planet and all of its species. For IPCC scientists, this prize is an important recognition and encouragement. For the decision-makers, it is another push for more decisive climate action.”

LLNL climate scientists have contributed as invited authors to every one of the six IPCC Assessment Reports since the first (FAR) was released in 1990 through to the latest Sixth Assessment Report (AR6), released in August 2021, and shared the Nobel Peace Prize with Al Gore in 2007 for these roles. The reports have documented and anchored global climate knowledge, melding the latest in observation and climate-model-based science.

The work of the IPCC has strongly benefited from LLNL’s Program for Climate Model Diagnosis and Intercomparison (PCMDI), which has coordinated global climate model experimentation through the Coupled Model Intercomparison Project (CMIP). The CMIP project, and its predecessors, have anchored the model-based climate science insights that have played a successively increasing role in each report. The latest phase, CMIP6, is the largest to date and was heavily featured in the AR6 with more than 24 petabytes of the latest climate model data made available through the Earth System Grid Federation (ESGF) — a global consortium initiated by LLNL computer scientists working alongside PCMDI climate scientists. DOE’s Energy Exascale Earth System Model (E3SM), led by LLNL, is one of the leading models contributing to CMIP6.

LLNL has a proud history of IPCC involvement. Since the first report in 1990, 30 LLNL climate scientists have been invited to contribute. Larry Gates, the PCMDI founding director, was an IPCC lead author in the first three assessments, and Ben Santer authored the world-changing conclusion that “the balance of evidence suggests a discernable human influence on the climate system” in the Second Assessment Report in 1995.

Paul Durack, a PCMDI climate scientist who was an author on the latest AR6 and previous AR5 reports, responded to the Gulbenkian Prize award announcement, saying, "It’s a pleasing recognition of how international scientific coordination drives positive change for humanity, mitigating the worst impacts of climate change. The IPCC and its collaborator network have proven that science- and fact-based decision making, along with global coordination, is our best tool in tackling the climate crisis.”

Karl Taylor, an author on four of the earlier IPCC reports and past PCMDI director, noted that "DOE's unceasing support of PCMDI for more than 30 years and the vision of its founding director, Larry Gates, have transformed climate modeling research by capitalizing on the scientific curiosity of experts around the world, harnessing their competitiveness and forging a remarkably cooperative spirit that has accelerated the advance of knowledge about our climate system."

LLNL has been leading global climate research for six decades, since the earliest contributions of Chuck Leith in the 1960s through to the leadership of PCMDI and E3SM today. LLNL climate science has truly been “world-changing," and sets the scene for ongoing breakthroughs in the years to come, according to Durack.

The Gulbenkian Prize for Humanity was launched by the Calouste Gulbenkian Foundation in 2020 with the objective of distinguishing those persons and global organizations whose work has greatly contributed to mitigating the impacts of climate change. The 1 million euro prize reflects one of the core missions of the Calouste Gulbenkian Foundation: supporting sustainable development, fostering well-being and improving the quality of life of vulnerable population groups in balance with environmental protection and economic prosperity. Among the potential fields recognized by this prize are those capable of contributing to reducing or absorbing greenhouse gas emissions, actions to raise the resilience of people and the environment to the impacts of climate changes, and as well as the deployment of financial resources, whether public or private, to accelerate the decarbonization of the economy.

The IPCC, the 2007 Nobel Peace Prize winner (in conjunction with Al Gore), is the UN organization that has fostered the production of scientific knowledge within the scope of evaluating the climate impacts of human actions and supporting governments in regards to their decision-making and the implementation of measures to combat climate change. Established in 1988, the IPCC has played a crucial role in accompanying the commitments made under the Paris Agreement on climate change through the regular publication of reports and the results of voluntary work undertaken by thousands of scientists all around the world, first publishing in 1990.