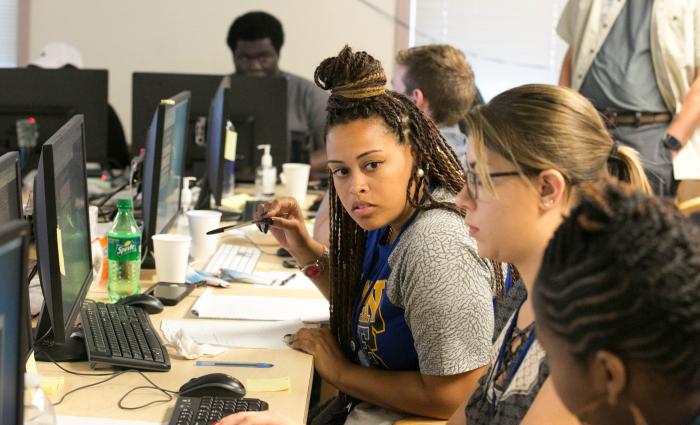 Students in the Cyber Defenders class of 2016 put the breadth of what they’ve learned to the test in what is now called the "Monarch of the Hill" team competition, an intensive three days of real-worldcyber security challenges.

Skills developed include intrusion detection and prevention, network monitoring and analysis algorithms, anomaly detection, reverse engineering, pattern recognition, code breaking and machine learning. Under the guidance of Lab mentors and program faculty, students compete in the "Monarch of the Hill" cyber event, complete a research project and share their results through posters and presentations. They also produce a cybersecurity awareness video in a Super Bowl Doritos-style video contest.

Previously called "Capture the Flag," the cyber competition was renamed "Monarch of the Hill" to more accurately reflect the goal of the contest and the gender balance in the field of competitors. Cyber Defenders is modeled on the DOE’s cybersecurity training program and "Monarch of the Hill" is a collegiate version on the related "Cyber Fire" exercise used to test DOE cybersecurity staff from across the complex.

Neale Pickett and James Wernicke of Los Alamos National Laboratory oversaw last week’s Cyber Defenders competition. Teams compete to be the "Monarch of the Hill" by trying to be the first to navigate a sequence of cybersecurity challenges.

"The categories of challenge are designed to flex different mental cyber muscles as teams make their way through the sequence of increasingly difficult challenges," Pickett said. "You apply the knowledge and things you’ve learned from one level to get to the next. It’s progressively difficult in the same way a video game has levels."

On the third day of competition, last Thursday, the intensity and excitement were palpable in the old U.S. Navy barracks building (Bldg. 219) that is now home to Cyber Defenders, as were some signs of fatigue. This year, 11 teams with names such as Silver Sabertooths, Purple Narwhals, Red Phishes, Black Jaguars, Cobalt Chupamambas and Chrome Dragons competed to be the first to complete the available challenges.

A new element of the competition this year is the inclusion of cyber law and policy challenges. Students learn about privacy rights contained in the Fourth Amendment as well as other aspects of cyber law. "We teach the full spectrum of cybersecurity legal and policy issues. It’s important to understand the rules of evidence and privacy," Matarazzo said. "This is very much a part of the cyber world today."

During a brief break in the competition, Elijah Williams, a senior at Millenium High School in Tracy, said that while the competition was tough, "it’s also really fun." This is Williams second year with the program, which he audited in 2015 after visiting LLNL courtesy of "My Brother’s Keeper."

With a longstanding interest in computing, Williams has attended computer science classes at Delta College and hopes to attend UC Berkeley to pursue his interests. "The people in Cyber Defenders are very helpful and I’m learning a lot in classes and seminars," he said. "Solving problems and getting the right answer is really satisfying."

Sonali Kondapalli, a senior at St. Francis High School in Mountain View, found out about the program online and applied. "I had some experience coding in AP classes, but previously had no experience with cybersecurity. I find it much more appealing now. Before I didn’t know what it entailed," Kondapalli said. "Previously I would not have considered cybersecurity, but I would seriously consider it now.

"I’ve learned a lot about how things work internally," she said. "You get a better picture of how the wired world around you works."

Ami Thakur, a senior at Livermore Valley Charter Preparatory, is no stranger to the national labs where her parents work. Thakur has attended Linux classes at Sandia National Laboratory. "I like cybersecurity and hacking through things," she said. "I plan to major in computer science and minor in cybersecurity.

"Cyber Defenders is a great way to better prepare myself for college," Thakur said. "It has given me a pathway to follow."

All three high school students said they would like to return as college students. Cyber Defenders is part of a Department of Energy/NNSA K-20 program to establish a computer science talent pipeline specializing in to the national labs and national workforce.

LLNL has hired more than 10 employees who were cyber defenders. According to the anecdotal evidence Matarazzo has collected via LinkedIn and Facebook, most of the cyber defenders who have gone through the program and who join the workforce remain in the security field. Many elect to pursue a higher degree.