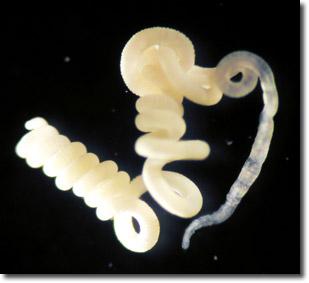 'Gutless wonder' gets by just fine without a digestive system

WALNUT CREEK, Calif. — With the help of symbiotic bacteria, an obscure marine worm has found a way to live happily without a mouth, digestive or excretory system.

In a paper in the Sept. 17 edition of the journal Nature , scientists from the U.S. Department of Energy’s Joint Genome Institute (DOE JGI) and their colleagues describe how this “gutless wonder” thrives in marine sediments, deriving its energy from a community of microbial specialists living just under its skin.

The worm, Olavius algarvensis, has no mouth to take in food, but it doesn’t go hungry, thanks to the goodwill of its hardworking bacterial tenants. The worm shuttles the bacteria to optimal energy sources in the upper oxygen-rich and the lower oxygen-depleted coastal sediments. In exchange, fixed carbon and all the amino acids and vitamins the worm needs are synthesized by the microbial communities, providing their host with ample nutrition.

On the other end of the digestive equation, waste products such as ammonium and urea, generated by the worm’s metabolism, are taken up by the symbionts – not only helping the host get rid of toxic waste products, but also conserving valuable nitrogen, which helps maintain the microbial community.

“It’s an excellent example of outsourcing energy and waste management, where this worm and the microbes living under its skin are enjoying a mutually beneficial relationship,” said DOE JGI Director Eddy Rubin.

Research into the complex worm/microbe interaction, revealed by DNA sequencing and other diagnostic techniques, was conducted by postdoctoral fellow Tanja Woyke and colleagues from the Rubin lab at DOE JGI and Lawrence Berkeley National Laboratory, and collaborators led by Nicole Dubilier, head of the Symbiosis Research Group in the Department of Molecular Ecology at the Max Planck Institute for Marine Microbiology in Bremen, Germany.

“The microbes, floating around in the sea, strike up a bargain with the worm – in exchange for housing, the microbes take care of energy production and handling the waste,” Rubin said.

O. algarvensis , a species of marine oligochaete worm isolated off the coast of Elba, the Mediterranean island where Napoleon was exiled, is one of nature’s oddities – able to survive without a mouth, an anus, or a renal or kidney system. The team uncovered the worm’s unique method of waste management through metagenomics, a strategy pioneered by DOE JGI and its collaborators. The technique entails isolating, sequencing, and characterizing DNA extracted directly from environmental samples to obtain a profile of the microbial community residing in a particular environment. This is the first instance of a symbiotic relationship being analyzed using a metagenomic shotgun sequencing approach, and heralds a breakthrough in symbiosis research.

For the project, Woyke donned scuba equipment and dove into the Mediterranean, where she sifted through tons of sediment to uncover enough of the tiny worms (just 0.1 mm in diameter and 10-20 mm long) and their microbial contents – which, like most microbial life, can’t be grown in a laboratory.

Particularly unusual about this worm/bacteria relationship is the fact that several different microbes come into play, unlike most symbiotic interactions between larger organisms and microbes where usually only one species of microbe is involved.

A total of 204 million bases, or units of genetic code, were generated for the study. Through a process known as “binning” – a protocol developed by collaborating author Frank Oliver Glöckner from the Max Plank Institute – these sequences were then organized by specific DNA signatures to reveal the identities of particular microbial species.

“By sequencing the genomes of the microbes, we were able to discern how they cope with the needs of the worm and why such a diversity of microbes is warranted,” Rubin said. It turns out that the worm doesn’t just provide housing for the microbes, it also supplies transportation. The worm burrows into the sediment, and as it travels through different environments, each with different chemical constituents, it provides energy adapted to the capabilities of a particular group of microbes. The microbes use chemical energy from the sediment, which permeates through the worm’s skin, to convert organic material into nourishment for their host.

“It’s not unlike a car with a hybrid motor that can run on both electricity and gas, depending on the situation,” Rubin said. “In certain places the worm is powered by specific bacteria that can exploit the chemical energy abundant at a specific location, while in other strata, where a different chemical energy source is abundant, the worm switches its energy production to resident bacteria that can exploit that available energy source.”

Rubin suggested that society could learn a lot from the tale of the worm and its helpful microbial buddies and their successful adaptive lifestyle. “We have been dependent on fossil fuels,” he said. “In the future we need to adapt like this worm has, and use a variety of different energy sources to ensure our needs can be met in a changing world.”

The work was conducted under the auspices of the DOE JGI’s Community Sequencing Program (CSP). The goal of the CSP is to provide a world-class sequencing resource for expanding the diversity of disciplines – oceanography, geology and ecology, among others – that can benefit from the application of genomics, particularly in the DOE mission areas of bioenergy, carbon cycling and bioremediation. Additional support for the project came from the Max Planck Society.