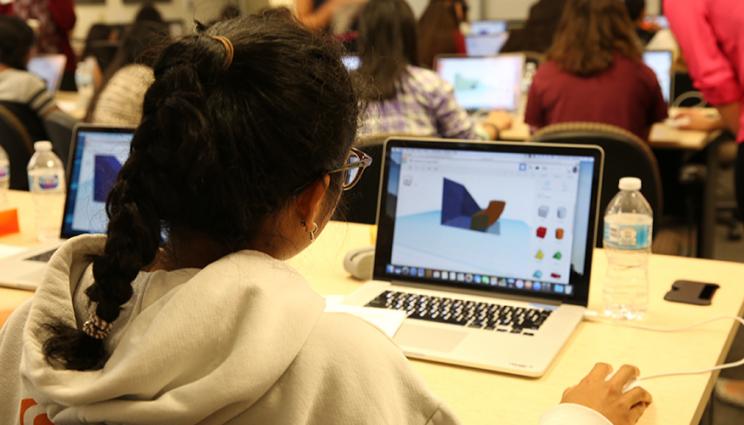 Students from Livermore and Granada high schools visited the Lab on Oct. 10 to design their own cellphone speaker amplifiers as part of a Girls Who Code event, held in conjunction with the Livermore Valley Joint Unified School District. A raffle was held to determine which of the designs would be 3D printed. Photo by Kate Hunts/LLNL

Granada High School sophomore Sehar Khan wants to be a professional wrestler when she grows up. But if that doesn’t pan out, she has a contingency plan.

"Engineering is really fun," Khan said. "You can be creative and you have the freedom and choice to do what you want, and I like that. I want to learn more about different types of engineering pathways; if I can get the background knowledge now, it will help me a lot later."

Khan was among the 29 students from Livermore and Granada high schools who got hands-on experience in computer-aided design (CAD) and an introduction to 3D printing at a special Girls Who Code workshop held at the Laboratory on Oct. 10. The group (girls and boys) learned about research being performed at the Lab in 3D printing and then took on a design challenge, creating their own cellphone speaker amplifiers using CAD software and customizing them to their tastes. A raffle decided which four of the student designs would be 3D printed by Lab engineers, who were on-hand to instruct the students.

Livermore High senior Faith Nordvik was one of the lucky raffle winners. It was her first time using a CAD program, but she was among the first students to complete her design.

"I thought the event was really informative," Nordvik said. "I’ve never done anything like it before, but it was easy to follow and easy to do. I appreciate the opportunity to learn more about it. The more I try it, the more interested I become."

Encouraging girls to explore science, technology, education and math (STEM) and closing the gender gap in STEM careers are the core tenets of Girls Who Code, a nationwide program that reaches more than 40,000 students across the country. LLNL partnered with the nonprofit organization (which supplies the curriculum) and the Livermore Valley Joint Unified School District to initiate the program in Livermore a year ago, enlisting the help of volunteer Lab employees. This year, the program has 23 volunteer facilitators who teach basic coding principles and computer science fundamentals one day a week at seven different school sites.

LLNL Computation Workforce Manager Marcey Kelley, who helped institute the Girls Who Code program at the Lab, said its purpose is twofold, to encourage students, especially girls, to pursue careers in science and to provide a way for Lab employees to give back to the community.

"Women are underrepresented in the STEM field, so (the Computation Directorate) is a big champion for women in computer science," Kelley said. "We know that if you don’t get girls engaged by the time they’re in junior high, they typically don’t go into STEM-related fields. It’s important to get them exposed so they’re not afraid of it."

While she had some previous experience in programming, Livermore High senior Chelsea Warner had never participated in a Girls Who Code event before Tuesday’s workshop. Warner said she was "kind of stressed" at first, but got the hang of the Tinkercad software with help from her peers and mentors. She was able to finish her design before the group broke for lunch and toured the National Ignition Facility.

"I think (the workshop) is super important because when I was younger, I was discouraged from getting into science because I was a girl," Warner said. "It’s kind of discouraging when your class is all males because it makes girls feel like they can’t do it."

Prior to the challenge, LLNL engineer Chris Spadaccini, who heads the Lab’s additive manufacturing effort, provided an overview of 3D printing, explaining how CAD is used to make parts and introduced students to processes and materials developed at the Lab. LLNL engineers Julie Mancini and Will Smith guided and observed the students, answering questions and helping them work on their designs.

Mancini, a Livermore High graduate, demonstrated several different amplifier designs and coached the class through the CAD program. She said she developed the challenge around the cellphone because it was tangible and relatable for the students.

"I wanted to do something useful and simple," Mancini said. "I hope this helped them make the connection that engineering can be applied to things that they’re interested in, like their cellphones, but I hope they also realized the basic concepts of CAD."

The workshop wasn’t limited to girls. Granada High junior Christopher Gonzalez said he was getting his introduction to coding through the Girls Who Code program, which had just entered its third week.

"I want to go into business and I hear coding is really big these days," Gonzalez said. "It just seems like a good thing to do."

Girls Who Code is a 10-week program offered at both Livermore Valley Joint Unified School district high schools and the district’s five middle school sites. At each afterschool meeting, students learn a new coding skill from their Lab mentors with an end goal of creating a project with their mentor’s guidance. About 120 students registered this fall, according to district STEM Coordinator Regina Brinker, who said the program is helping to demystify computer science and engineering.

"Most of the students in this program have not done 3D printing, so this is opening up a whole new area for them," Brinker said. "To have the expertise of the Lab introduce them to 3D printing and show them the really high-end capabilities that happen at the Lab is really a nice connection. Giving them that opportunity to practice engineering and design, that by itself is what makes a difference and what gets the kids excited."

"We are so grateful for the Lab continuing to partner with our teachers as well as our students," Rambo said. "Having a real-world scientist working with the girls and boys who are part of it really gives them insight to what the applications for this type of career might bring…It gives the girls permission to embrace this as a potential career for themselves."

The design challenge was the first to receive funding from the newly launched Livermore Lab Foundation (LLF), a nonprofit founded as an avenue for philanthropic fundraising for Lab-related research, education and outreach.

"It’s a great project for the Livermore Lab Foundation to have funded," said Annie Kersting, LLNL’s director of university relations and science education. "It’s really highlighting the efforts that the volunteers -- from staff scientists and the Computation Directorate – who have put in a lot of time last year to launch this program, and it’s come to fruition."

"I hope they have that ‘a-ha’ moment here and that this will keep their interest in coding and computer science that will go beyond high school," added LLF President Dona Crawford, the Lab’s former associate director for Computation. "These kinds of opportunities make it real for them."