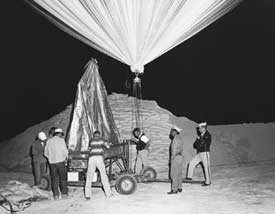 Operation Plumbob was the sixth in a series of continental tests conducted by the Atomic Energy Commission (AEC) to test laboratory design of weapons. The AEC and other government agencies also gathered nuclear effects data for military and civilian purposes, including creation of effective countermeasures. It was, in 1957, the largest series attempted in Nevada with 30 shots from early April to early October. Testing in Nevada could be accomplished more expeditiously and cheaply than possible in the Pacific, but was also useful in developing the next round of full-scale testing at the Eniwetok Proving Ground.

A number of operational advancements were made on Plumbob in new techniques for firing the test devices to minimize fallout hazard. Three basic test methods were tried:

These methods were superior to air-drop testing by allowing for more diagnostic data, while easing the fallout problem and speeding up firing schedules.

The balloon series, including the Hood Event, was used for positioning test devices at higher altitudes and made its debut in Plumbob. The technique also eliminated steel tower contamination from vaporized metal that occurred during tower shots. In all, 13 devices were detonated at elevations ranging from 500 to 1,500 feet.

The most difficult step in balloon operations was the transfer of the weapon cab to the balloon and was accomplished only when surface winds did not exceed 15 knots, predicted on basis of wind persistence. These surface winds, known as balloon weather, accounted for only seven days delay. Unfavorable fallout predictions resulted in 9 days of delay on balloon shots, whereas 55 days delay were encountered on tower shots.

Once the weapon cab was connected in series with the main balloon cable, the three guide cables connected to power winches at some distance from ground zero were attached to the cab. After arming of the device in the cab, full control of the balloon was taken over at the control point.

At the control panel, the operator visually monitored raising and positioning of the balloon on two television screens, the pictures being relayed by a microwave link. Both pictures displayed horizontal orientation. During Plumbob, balloon accuracy averaged two feet within the required position.