If you have questions about the John S. Foster, Jr. Medal, please send an email fostermedal [at] llnl.gov. 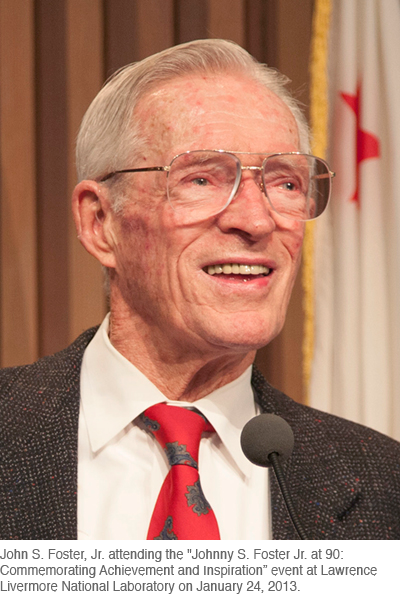 Dr. John S. Foster, Jr. has provided a legacy of teamwork, innovation, leadership, and scientific and technical excellence throughout his long and distinguished career in service to the nation. His multifaceted accomplishments and his remarkable ability to inspire, mentor, and motivate his colleagues are attributes honored by the John S. Foster, Jr. Medal.

Dr. Foster began his career of national service when, during World War II, he left college in his sophomore year to become an expert on radar and countermeasures at the Radio Research Laboratory at Harvard, then he spent a year in the Mediterranean with the 15th Army Air Force as a scientific advisor on the subject. He made the effort to examine and operate German equipment to figure out how they were shooting down aircraft, devised an effective countermeasure, and saved the lives of many American aviators.

Dr. Foster continued his education at University of California, Berkeley and as a graduate student, was profoundly influenced by Professor Ernest O. Lawrence and his way of managing the U.C. Radiation Laboratory as "one big family." Dr. Foster stayed after his degree at the newly formed Laboratory in Livermore. He fully embraced Lawrence's emphasis on pursuing technically challenging, large-scale projects to meet highly important national needs and providing a work environment conducive to team science without an imposed formal organization structure.

At the Laboratory, Dr. Foster led team efforts that made a major breakthrough in nuclear weapon design that is the basis for all modern U.S. nuclear weapons. He also recognized the need and spearheaded early-on efforts to improve weapon safety and include security features in deployed nuclear weapons. Dr. Foster credits his success to Lawrence's "team science" approach to research, the spirit of innovation at Livermore that he and his colleagues established, and the generous help provided by Los Alamos to the newly formed Laboratory, which set the precedent for cooperation and competition between the two nuclear design laboratories.

Dr. Foster's technical successes and leadership capabilities positioned him to be asked to be Laboratory director, a responsibility he felt obligated to accept in 1965. As director, he saw the need for Livermore to expand its national security responsibilities to meet existing and emerging national needs. For example, Dr. Foster established a formal relationship with the intelligence community and formed Z-Division at the Laboratory to analyze and understand the Soviet threat and develop innovative technologies for intelligence agencies. In addition, with Livermore's development of special effects weapons and the Plowshare Program for peaceful use of nuclear explosives, it was important to understand the biological effects of ionizing radiation. The Laboratory established a biomedical division, which cast attention on radiation damage at the cellular level and, over time, led to the Human Genome Project and development of DNA analysis systems for biosecurity and human health applications. Research programs also began on laser technologies for inertial confinement fusion. 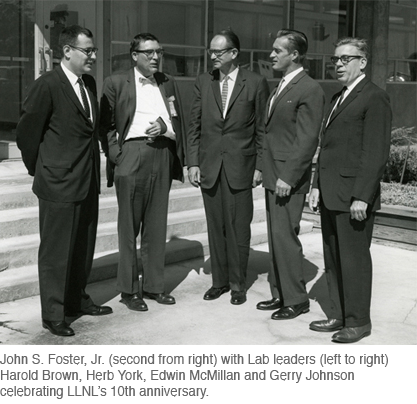 National service then called Dr. Foster to Washington, D.C., where he became Director of Defense Research and Engineering for the Department of Defense. Among his many accomplishments, he guided investments in technologies such as smart weapons and night vision to support the Vietnam War effort. Dr. Foster also saw the need for national technical assessments and "red teams" to vigilantly assess the possibility of (Soviet or U.S.) breakthroughs in key technology areas, such as submarine detection, and he initiated research programs to develop radar satellites for reconnaissance and capabilities to detect Soviet missile launches. He earned a reputation of being relentless in constructive criticism—examining one's assumptions and looking at programs to see what might have been missed or what could go wrong that had not been considered. Dr. Foster served for eight years, under presidents Lyndon B. Johnson and Richard Nixon.

In 1973, he left Washington to become a vice-president of TRW, Inc. There, he led the company's program to develop new technical applications for providing energy, later served as TRW's Officer for Science and Technology, and finally joined the board of directors. While at TRW—and since his retirement in 1988—Dr. Foster has served on many defense- related advisory committees and task forces. As an example, Dr. Foster was a key participant on the 2008 Congressional Commission on the Strategic Posture of the United States. Other commission members have acknowledged that he was instrumental in guiding the group to a consensus on number of potentially divisive issues. The commission's report has been pivotal in guiding decisions about the future of the U.S. nuclear deterrent.

Over the years, Dr. Foster has continued to advise the Laboratory's senior leadership and technical workforce. He has urged the Laboratory to continue its tradition of pursuing game-changing innovations in science and technology to make the nation more secure.

Dr. John S. Foster, Jr. has won many awards for service to the nation, among them the E. O. Lawrence Award, the James Forrestal Memorial Award, three Department of Defense Distinguished Public Service Medals, the Founders Award from the National Academy of Engineering, the Enrico Fermi Award, the H. H. Arnold Award from the U.S. Air Force, and the Department of Defense Eugene G. Fubini Award.