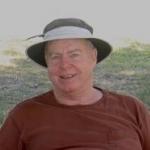 Cook was born on June 5, 1948 in Berkeley to parents William and Mary Cook. The family moved to San Jose in 1957. He graduated in 1966 from Campbell High School, and then attended community college until he enlisted in the Marines in 1968. He served his country for two years during the Vietnam War and was honorably discharged in 1970.

He graduated from University of the Pacific with a degree in mechanical engineering. After his retirement from his career as an engineer and machinist at Lawrence Livermore National Laboratory, he took up tutoring high school students through Give Every Child a Chance.

He married twice, and welcomed his only child, a son, William Garde Cook (Zak) in 1976. Zak blessed him with three grandchildren: Caileen, Rowan and Eddie.

Services will be private. His ashes will be interred at Oak Hill Cemetery in San Jose.