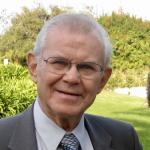 Hampel was born in Vilnius, Lithuania to Richard and Edith Hampel. In 1950, at the age of 20, he received a one-year full scholarship to study at the University of Mississippi. In America he found hope and peace and in 1952 immigrated as a refugee. His first job was at Sciaky Bros. in Chicago as a research technician in their development laboratory. In Oak Park, Chicago he met Annelies, who also had recently immigrated from Germany. They were married in 1954 and shortly thereafter he was drafted into the U.S. Army during the Korean war. They were stationed at Dugway Proving Grounds, Utah. Through the GI bill he was able to continue his education at the University of California, Los Angeles and graduated with a bachelor of science in physics. Soon after he read in Reader’s Digest of the work being done at Lawrence Radiation Laboratory. He applied and was hired as a physicist in 1960.

His 30 year career at LLNL was filled with creation, innovation and achievements. Through the Lab he continued his education and received his master’s degree in nuclear engineering from University of California, Berkeley. In the early 1960s, he worked as group leader for the PLUTO Nuclear Propulsion Program for nuclear cruise missiles. Later he founded the Technology Information Systems Program, which developed and commercialized software to connect computers and allow dissimilar computers to talk to each other worldwide and in networks. 1987 he began a two year assignment to the Pentagon, establishing a program for the protection of sensitive data using Public Key Cryptology. After retiring from the Lab in 1990 he continued consulting in Washington with USAID and private firms in computer security before retiring in San Ramon.

He is survived by his loving wife of 66 years, Annelies; his three daughters and their spouses: Angelica and George Gonzalez of Fresno, California; Karine and Andy Villeggiante of Santa Rosa, California; and Tania and Darryl Smith of Pleasanton, California; and by his seven grandchildren, David, Vanessa, Daniel, Michael, Bradley, Davis and Marcus and great-granddaughter Cecily.

Family and loved ones will celebrate his life at a future date when COVID-19 restrictions are lifted.