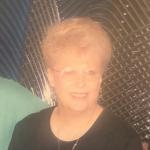 Lawson was born on May 30, 1940 in Winnemucca, Nevada to Louis and Rose Mueller. The family returned to Livermore where she graduated from Livermore High School in 1958. She was working at Snow White Drive-in when she met James Lawson. They were married in 1959 and had their son Steven in 1960.  Jim was drafted and they were stationed around the United States. They returned to Livermore where they resided for more than 30 years.

She worked at Lawrence Livermore Laboratory from 1978–1996 in the engineering records center. After retirement, they built a home on the coast in Anchor Bay, which she designed. She continued to paint and showed her work in local galleries. She was an accomplished painter and was a member of the Livermore Art Association. Over the years she and Louis fostered children from other countries and were huge supporters of World Vision(?).

She is proceeded in death by her parents and her brothers Erwin and Michael. She leaves behind her husband Jim of 61 years and her son Steven (Dixie) of Cottage Grove, Oregon; grandchildren, Josh (Chassity), Matthew, Dennis (Michelle), Tracy (Loren), 19 great grandchildren, and many cousins, nieces, and nephews.

She will be greatly missed by all that knew her. There are no plans for services at this time. Those who wish to remember her are encouraged to make donations to their favorite charity.