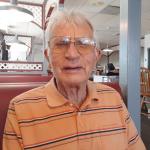 Bennett left his hometown of Buffalo, Missouri at the age of 18 and headed west. He began his career at Lawrence Livermore National Laboratory (LLNL) in 1957; he retired in the fall of 1991 after 34 years of service. He launched his own business, Bennett Photography, towards the end of his LLNL career.

Bennett is survived by his four children; granddaughters Nicole and Erin Bennett; cousins and nieces. He was preceded in death by his parents, beloved sister Rose Marie, and wife Ann.