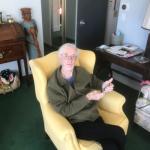 Grabske was born in Independence, Missouri on June 29, 1936. He was a graduate of Kansas University with a PhD in biochemistry. He married his wife Helga (Frenzel) Grabske in 1957. They came to California in 1964 and settled in Livermore where he worked as a biochemist for 31 years at the Lawrence Livermore National Laboratory. He retired in 1993.

He is preceded in death by his wife in 2019 after 62 years of marriage. Later he met Judith Marx Golub, and they remained together until his death. He is also survived by his son, Martin Charles Grabske and daughter-in-law Pam Grabske of Livermore.

In lieu of flowers, a donation to a no-kill shelter in his memory would be appreciated.