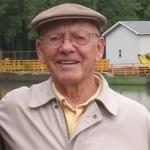 Robert Allan DeChene died. He was 98.

DeChene and his twin sister Margaret (Peg) were born to Ernie and Alvie DeChene on Feb 2, 1924, in Oakland, California. He was a Lt.in the U.S. Army Air Corp. in World War II, served as a navigator on the City of Berkeley B-29 Superfortress out of Guam, and was awarded numerous medals for his service, including the Distinguished Flying Cross in 1945. In 1952, he was recalled for service in the Korean War, where he was stationed in Texas. He was honorably discharged from the service. He worked for the Oakland Tribune before becoming an engineer at Lawrence Livermore National Laboratory for more than 30 years.

He is survived by his wife Elizabeth, son Neal, daughter-in-law Jane, and numerous nieces, nephews, and friends. He was predeceased by his son Steve and sisters Jeanne Jordan and Peg Humphreys. The family is very grateful to Gina Tausic, their longtime friend, and the numerous care givers who have cared for him over the last few years.

A memorial service will be held in the future. In lieu of condolence gifts, please consider a donation to Habitat for Humanity or a charity close to your heart.