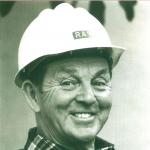 Devany was born on Feb. 12, 1926, in Livermore, to Oliver and May Devany. He served in the Army’s 76th infantry in Western Europe, leaving to support the war effort during his senior year in high school. Upon his return to civilian life, he was employed by the fire department at Camp Parks and Hansen Oil Company prior to starting with Lawrence Livermore Laboratory in 1953. He retired in 1984, following a 31-year career. He spent the majority of his time as a rigger.

He married Shirley Nevin on Oct. 17, 1948. For more than 60 years he was an active member of the local Veterans of Foreign Wars VFW Post 7265. He served as post commander from 1989 to 1990. He bowled for many years on the VFW team, and was involved in the wide variety of services the post provided.

Devany is survived by three children, Jim (Jan) Devany of Fresno; Tom (Kelly) Devany of Nipomo and Mary Devany and Tom Reiter of Arnold. His grandchildren are Kristin, Maggie, Laura, Genevieve, Vince, Justin and Mariah. He is survived by 13 great grandchildren. He was preceded in death by his wife Shirley, parents Oliver and May Devany; and siblings Oliver, Veronica, Russell and Dorothy.

A rosary will be held at Callaghan Mortuary on Tuesday, Oct. 13, at 6:30 p.m. Mass of Christian Burial will be held at St. Charles Borromeo, Oct. 14 at 11 a.m. Due to COVID restrictions, both services will be for immediate family only.

In lieu of flowers, donations may be made to VFW Post 7265 in Livermore, or to a charity of the donor’s choice. An online guestbook is available for condolences at www.callaghanmortuary.com.