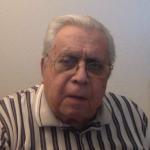 Raymond F. Nehem, a former LLNL engineer who worked in Hazards Control, died June 12. He was 79.

Nehem was born in National City, California, on July 21, 1941. He attended Parris High School. Following graduation, he enlisted in the U.S. Air Force. After serving his country for four years, he attended California State University, Long Beach, graduating with a bachelor of science in electrical engineering.

He accepted an electrical engineering position with the U.S. Department of Defense. He took advantage of an offer to attend Texas A&M University-Corpus Christi and graduated with a master of science in system safety engineering. Nehem moved to the Bay Area, taking a position with the Ford Motor Company. He worked on numerous projects including the Bradley Fighting Vehicle. When Ford went through a downsizing, he applied at the Lawrence Livermore National Lab. From 1991- 2007 he worked as a system safety and laser safety engineer. He had a break in his Lab service, when he left for two years to work on low orbit satellite projects for NASA Sunnyvale.

After his retirement, he moved to Chandler, Arizona, to be with his family.. He enjoyed easy-listening music, talking about his grandchildren, watching movies, and attending church.

He is survived by his children, Peter Nehem, Taryn (Nehem) Stangle, and Todd Nehem; and grandchildren, Tatum and Tanner Stangle.