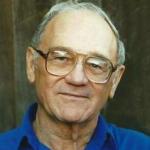 Nickolas was born on Oct. 4, 1925, in Rock Springs, Wyoming, to Louis and Diamanta Xirakis Nickolas. When he was 18, he joined the Army and enlisted at Fort Warren in Wyoming. He served in Europe and fought in several prominent battles, including the Battle of the Bulge. He earned a Purple Heart, Bronze Star, and served until the war ended in 1945. He was also later awarded a U.S. Air Force Commendation.

After returning home, he moved to California and earned a bachelor’s degree in physics and a master’s degree in computer science at the University of California at Berkeley. While working his way through school at a movie theater in Oakland, he met and fell for Dorothy Lazzo, whom he married in 1955. They eventually settled in Livermore, where Nikolas enjoyed a lengthy career at Livermore Lawrence Laboratory as a computer scientist. He worked there for 30 years and retired in 1984.

Due to the pandemic, a memorial service will be held online, at a time to be announced. He will be interred next to his wife, at the Memory Gardens Cemetery in Livermore.