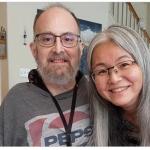 Kotta was a renaissance man with a warm intellect and sharp sense of humor. Fluent in Japanese both written and oral, He initially taught English in Japan, became a free-lance translator specializing in science and engineering, then worked as a publication editor for Lawrence Livermore National Laboratory's Science & Technology Review magazine. He also founded a company called Mellow Monk that specialized in fine Japanese green tea.

He is survived by his wife of 33 years, daughter Erica, son Sean, brother Chad, and mother Nancy. He was loved by many and will be very missed. In lieu of flowers the family requests support via https://gofund.me/69cdbba1.