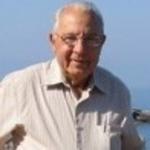 Bommarito was born in Detroit, Michigan on Aug. 13, 1927, to Tom and Rosalia Bommarito. He moved to Santa Clara in 1946. He graduated from the University of California Berkeley School of Optometry in 1951. He served in the Korean War and the Army Reserves and retired as a captain. After serving in the army, he started an optometric practice in Los Altos, until his retirement in 1989. During this time and after retirement, he worked as an optometrist at Lawrence Livermore National Laboratory for 40 years and at NASA Ames in Mountain View. He was a member of the Italian Catholic Federation in Mountain View, Los Altos Lions Club and California Optometric Society. After retirement, he started his second career for the next 32 years as an occupational vision and environmental optometrist and certified industrial ergonomist.

He is survived by his wife Johanna of 63 years, his daughters Carol and Jean Marie LaPorta (John); his son Paul, his grandchildren Christopher and Nicole LaPorta; his brothers Joe (Ada) and Tom and his sister Mary. He was preceded in death by his brother Phil (Lue) and his brother-in-law Sal and his sister-in-law Norma.

A rosary and funeral mass will be held at 10:00 a.m. on Friday, Sept. 24 at St. Joseph of Cupertino Parish, 10110 North De Anza Blvd., Cupertino. Private family entombment at Gate of Heaven Catholic Cemetery in Los Altos.

In lieu of flowers, the family asks that donations be made to the charity of the donor's choice.