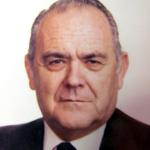 Born August 27, 1919, in Bolckow, Mo., he was one of five children. After his mother died when he was 15, the family moved to San Francisco where he attended Galileo High School. While attending high school he joined the California Conservation Corps and was sent to Burns, Ore. He later returned to high school and graduated.

A naval veteran of World War II, he joined the service in 1941, before Pearl Harbor. He became a naval cryptographer and radio operator where he served in the Pacific Theater. He was involved in the code breaking effort to crack the Japanese code that helped lead to the end of the war.

After serving in the Navy, Dane went to college and earned his bachelor of science degree in electrical engineering. He spent his early career in a variety of jobs, including working for the Contra Costa Sheriff's Department. He joined the Lab in 1954. As an electronics engineer he specialized in communication systems using high frequency microwave and was involved in technical security. He retired after 30 years in 1984 as a radio frequency manager and worked with many engineering departments, and security groups through UC Berkeley and the DOE.

In 1962, while working at the Lab, he met his future wife, Vivian. They were married for 51 years. They combined their families with a total of six children: Barry Mullin of Shingle Town, Paula Pipitone of Danville, Janis Buckley, Paul Dane Jr. of Concord, Robert Dane of Sacramento and Jim Mullin.

He was active in a number of organizations, including serving as past president of the LLNL Retirees Association., past vice president of Retired Officers Association, and member of IEEE, SIRS, Elks, and QCWA, as well as on the board of directors of the U.S Naval Cryptographers.

Always a fan of music and movies, Dane enjoyed collecting LP records and movie books, and also was always on the lookout for an old radio or something nostalgic. His prize possession was a World War II RIP-5 code machine used to break the Japanese code which he donated to the USS Pampanito, a Balboa class submarine from Pearl Harbor on display in San Francisco.

Dane's real passion was amateur radio. He was an active amateur (ham) radio operator and enjoyed talking to people all over the world. He was proud of his call letters "W6WOW." He was an active member and former vice president of the Society of Wireless Pioneers, as well as a Fellow of the Radio Club of America, the oldest radio club in America.

A memorial service was held at the Chapel First Presbyterian Church of Livermore on April 23.