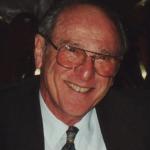 Mortimer L. “Mort” Mendelsohn, who was instrumental in bioscience research at Lawrence Livermore National Laboratory, passed away quietly in his sleep in Pleasanton on Jan. 8. He was 94.

He had a long and celebrated career in medical research as a professor at the University of Pennsylvania Medical School. He joined the Laboratory in 1972, serving as a senior scientist, program director, division leader and ultimately associate director of the Biosciences and Biotechnology Division. His early work focused on cancer, understanding tumor growth, radiation effects and genetic mutations.

Mendelsohn worked at the Lab for more than 24 years. Under his leadership his division helped decode human chromosomes in the Human Genome Project, developing high-tech devices to sort cells and analyze DNA, as well as developing ways for the federal government to defend the nation from biological weapons. He was instrumental in cancer research, contributing several key studies on the mutation of human cells. He was a fellow of the National Academy of Science. He served as vice chairman of the Radiation Effects Research Foundation in Hiroshima, Japan, and received the Third Order of the Sacred Treasure, one of Japan’s highest civilian awards, for his contribution to Japanese and American science.

Outside of work, Mendelsohn was an avid gardener, world traveler, tennis player and musician. Long active in the arts, he served on the boards of Del Valle Fine Arts and Livermore Valley Performing Arts Center. His family, friends and the many people he assisted during his career will miss him dearly.

Condolences may be sent to Laura Johnston, 365 Canyon Court, Grand Junction, CO 81507. The family will have a private celebration of life at a later date.