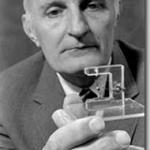 Morgan Sparks, a former director of Sandia National Laboratories, inventor of the first practical transistor and a longtime civic leader in Albuquerque, died May 3 in Fullerton, Calif. He was 91.

Sparks served as Sandia labs director from 1972 until his retirement in 1981. Prior to Sandia, he had a 30-year career with Bell Laboratories in New Jersey and is best remembered as the person who fashioned the first practical transistor, the semiconductor device that has revolutionized almost every aspect of modern life.

After his retirement from Sandia, Sparks accepted an appointment to the Robert O. Anderson School of Management at the University of New Mexico, where he served as dean from 1981 to 1984. He also was active in Albuquerque civic life, serving as chair of the United Way, the Police Commission Task Force and leading the effort to keep and enhance the activities at Kirtland Air Force Base. He served on the boards of Presbyterian and Lovelace hospitals, the New Mexico Symphony Orchestra and Albuquerque Academy. Until 2007, he was president of High Desert Investment Corporation, the developers of the High Desert and Mariposa communities.

He was preceded in death by his wife of 57 years, Elizabeth MacEvoy Sparks. He leaves four children: Margaret Potter of Waitsfield, Vt., Gordon Sparks, also of Waitsfield, Patricia Fusting of Fullerton, Calif., and Morgan Sparks, of Burlington, Vt.

A memorial service will be held in Albuquerque later this month.