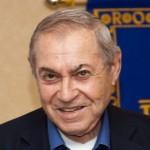 Finger, beloved father, husband, grandfather, companion, and friend died unexpectedly on February 11, 2019, while recovering from back surgery at home in Livermore, California.

He was known by family and friends as a kind and generous person who always had an interesting story to tell. A selfless person, he was described by others as “a true gentleman,” someone you could always count on for help or advice. Ever the consummate scientist, he worked at Lawrence Livermore National Lab (LLNL) for over 50 years where he served as Deputy Associate Director and Division Leader in the Chemistry and Materials Sciences Directorate. Of the many projects throughout his career at LLNL, he was particularly proud of his recent work protecting our country’s military personnel by overseeing the development of new armor to protect Humvees from damage by IEDs.

“People don’t tend to think about high explosives as new but using them for precision applications was new when Milt joined the Lab,” said Randy Simpson, LLNL associate program leader. “He was a force in his field. There were four greats in the U.S. in energetic materials, and Milt was one of them. His legacy lives on at the Laboratory today not only through the people he hired and mentored but also through Joint Munitions Program, which is now in its 35th year.”

Finger is regarded as the father of the Joint Munitions Program, a 35-year collaboration between the Department of Energy and the Department of Defense that serves to this day as a model for interagency collaboration. He also served on numerous scientific boards including task forces for the U.S. Air Force Scientific Advisory Board and the Defense Science Board. He received the Air Force Decoration for Exceptional Civilian Service and the U.S. Army Award for Patriotic Service.

“Milt was a pioneer in the field of energetics,” said Tony Melita, former senior executive service member in the Office of the Secretary of Defense. “He was a gentleman and a scholar. Much appreciated and respected by all who had the pleasure or knowing and working with him.”

In his community service as a member of the Livermore Rotary Club, he has supported local K-8 schools with dictionaries as well as scholarships. International projects include potable water systems in South India; orphanage support in Nepal with the Gates Foundation; the eradication of polio worldwide; a burn center in Chile and equipping a pediatric ward in Kosovo.  As the former chair of the board for the international non-profit foundation Powering Potential, he was driven to enhance education and stimulate the imagination of students in underdeveloped countries by bringing computers and technology to rural school children in Africa.

Finger was predeceased by his wife Marian and is survived by his children Erik Brian Finger and Alicia Maura Finger, and 4 grandchildren, Mari, Aya, Brady, and Blake.

His memorial will take place on Friday, March 1, at 2 PM.  The services will be held at Congregation Beth Emek located at 3400 Nevada Court in Pleasanton, CA.  A reception in the social hall will immediately follow.   In lieu of flowers, please consider a donation to Poweringpotential.org, Rotary Club of Livermore (livermore-rotary.org), or a charity of your choice.  He served on the board of Powering Potential and was passionate about its mission.