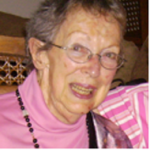 Lynn Kelly Brown, a Lab retiree and resident of Gardnerville, Nev., died Jan. 22. She was 83.

Brown was born Rosslyn Elaine Morrison on Feb. 3, 1924, in Marysville, Calif. She later changed her name to Lynn. She was the youngest of three children born to William (Doc) Morrison and Lucille Lyman Morrison.

In 1942, at 18, Brown became a “stewardess” on the Southern Pacific Railroad traveling between Los Angeles and New Orleans weekly. She met FBI agent Samuel Hervey Kelly Jr. in New Orleans, and they married in January 1946. They lived in Texas, New York, Venezuela and California and raised three children in Livermore.

Brown worked at the Lab in the Travel Department in 1963, and retired in 1978. After her first husband died, she married Edward Wesley Brown and moved to Gardnerville in 1978. They divorced in 1993.

Brown was a self-taught artist who worked in oils, acrylics and clay. She was a founding member of the Livermore Art Association and the East Fork Gallery in Gardnerville. She also enjoyed gardening and playing bridge.

She is preceded in death by her sister Esther Tucker and her brother Ross Morrison.