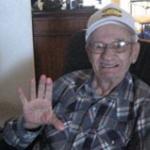 Corvello retired in 1978 from the Lab where he was a supervisor of the custodial department. He continued to work at the Lab as a security escort until 2002.

He is survived by his wife of 48 years, Mary; children, Paula and Mike Bohannon of Tracy, Terry and Mike Butler of Turlock, Darrell and Pat Silva of Manteca, and Ron Silva of Lathrop; brother Gilbert Corvello of Castro Valley; sister Betty Terra of Cressey, Calif.; eight grandchildren and six great-grandchildren.