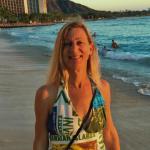 Davis was born in 1966 in Santa Barbara, California. She graduated from the University of California, Santa Barbara with a degree in Spanish literature. She lived in Spain and worked at the Spanish consulate in Los Angeles, which sparked her interest in diplomacy. She taught English in the Czech Republic soon after the fall of the Berlin Wall and traveled extensively throughout Eastern Europe and Russia.

Davis pursued her master’s degree at the Monterey Institute of International Studies and was a  graduate of the Center for Nonproliferation Studies. She was an intern at the International Atomic Energy Agency and later returned to the U.S. Embassy in Vienna to work on nuclear safeguards policy. She went on to serve in the Department of Defense and the Department of Energy (DOE), where she accepted a position managing nuclear safeguards support to the International Atomic Energy Agency.

While at DOE she met her future husband, Zachary Davis, who was representing the Arms Control and Disarmament Agency. In 1995 she moved to the State Department and served as chief of staff to Ambassador Norm Wulf, the U.S. representative to the Nuclear Nonproliferation Treaty for the 25-year NPT Review Conference.

Lisa and Zack returned to California to work at Lawrence Livermore National Laboratory’s Z Division, where Lisa quickly rose through the ranks to manage a wide range of analytic and operational intelligence support programs across the Lab. In 2006 she returned to Washington, D.C. to support innovative inter-agency interdiction efforts, where she earned high praise for building bridges between diplomatic, military, intelligence and technical agencies. In 2015 Lisa founded her own consulting firm to advise a range of government and private sector clients.

Davis was a runner, yoga practitioner, stand-up paddler and hiker. She took delight in literature, especially Spanish language fiction, languages, slapstick comedy, baseball, soul and disco music, beaches, travel, family and friendships. Her diagnosis of pancreatic cancer came without warning during a family trip to Italy. She is survived by her father, Bill Owens of San Clemente; mother, Wendy Owens of Oceanside; brother Bill and family of Saipan; sister Sara Madani and family of Santa Ana, her teenage sons, Max and Sam; and her husband of 20 years, Zack.