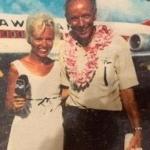 Peck passed on July 9 next to his wife, Florence Ruth, who followed him shortly thereafter on July 10. He was born and raised in San Francisco and Oakland during the Depression. He graduated from Fremont High School in 1943 and served in the Army Air Forces during WWII. He was a twin and is preceded in death by his sister Lucille. He met Florence at San Francisco City College in 1948 and were soon married.

Peck earned his bachelor’s in biology at San Francisco State College. He became a chemist, first for Pacific States Steel and finally for the Lawrence Radiation Laboratory. He loved the collegial atmosphere at LLNL and worked there for 33 years. He traveled three times to the Pacific Proving Grounds and loved computers. He was an early user of the time-sharing "Octopus" computer network.

In their final years, Peck and his wife were cared for at home by their sons and spouses. Their ashes will be spread at sea in a private family ceremony outside the Golden Gate Bridge.

Donations can be made to Shriners Hospital. A celebration of life website can be found at www.tribute.co/leeflo/