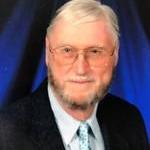 Ramspott was born in Jacksonville, Florida to Francis Laurence Reed and Kathryn Pillsbury Reed. He graduated from Principia College in 1956 with a degree in geology. He received a Ph.D. in geology and geochemistry from Penn State in 1962. He taught in the geology department of the University of Georgia at Athens until 1967. He joined Lawrence Livermore National Laboratory, retired  in 1993 and worked for a nuclear waste subsidiary of TRW for six years. During his career he started and led many environmental projects at the Nevada Test Site. In addition to numerous scientific reports and papers, he wrote a book on a 1970 nuclear leak which had a profound effect on all subsequent nuclear testing at NTS. His 2010 book, "The Baneberry Vent: A Geologist Remembers," has had wide circulation.

A celebration of life will be held privately. In his memory, donations may be sent to DiscoveryBound, 5201 S. Quebec Street, Greenwood Village, Colorado 80111.