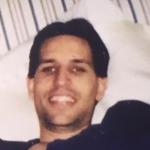 Logory grew up in Rochester, New York. He attended Greece Athena High School and earned the honor of Eagle Scout. He earned his bachelor and master of sciences at University of Buffalo and his Ph.D. in aerospace engineering at Rensselaer Polytechnic Institute. He moved to California and worked at Lawrence Livermore National Laboratories and taught physics at Las Positas Community College.

He worked at LLNL for more than 22 years. Known and admired for his analytical skills and concise writing, he often made critical contributions to nuclear nonproliferation assessments. He left LLNL in 2018 due to health concerns. He is remembered with fondness and respect, as he produced good work and developed lasting friendships.

He is predeceased by his father Larry E. and brother Roneld Logory. He is survived by wife Christy Busch; children Ian, Edie and Eden Ford; mother Marlene Logory; sister Bonnie Frank; brother and sister-in-law Douglas and Denise Logory; aunt Ann Waiter; and many nieces and nephews.

Private arrangements will be made by the family at a later date. Donations in his honor may be made to the Animal Red Cross, 555 N El Camino Real a117, San Clemente, California 92673.