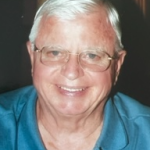 Shaw was born in Thief River Falls, Minnesota to Bert Shaw and Inger Mikelson. As a child, he lived in Westly, Wisconsin, Newton, Iowa and Northfield, Minnesota. He attended Saint Olaf College, graduating in 1957. In 1958, he moved West, accepting a position at the Lawrence Livermore National Laboratory as a physicist. He spent most of his time at the lab working on hydrodynamic test diagnostics, specializing in ultra-high-speed photography. He worked at the lab for 36 years, retiring in 1994.

He was a beloved husband of 57 years to Carol, loving father to Kerry Miller (Mike) and Eric Shaw (Margaret), an adored grandpa of Justin Miller, Conner Miller, Alexis Shaw, Sophia Shaw and a newly great grandpa to Addison Miller.

A celebration of life will be held Aug. 20 at 11 a.m. at Lynnewood United Methodist Church located at 4444 Black Avenue Pleasanton, California 94566.