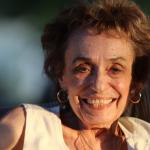 Nagel was born Sept. 25, 1931 to parents Michael and Sarah Geraci in New Jersey.  She grew up in Hollywood and moved to Berkeley. She graduated from Berkeley High in 1950 and married Ron Nagel in 1951. They were married for 56 years until Ron's death in 2007.  They moved to Walnut Creek to start their family and then moved to Livermore in 1966. She joined Lawrence Livermore National Laboratory in 1973 as an administrative clerk and retired in 1993.

Nagel had a variety of interests that included music, dancing, cooking, crocheting and shopping. Her father, who was a Bay Area professional musician, inspired her music aspirations. She performed at various local events, singing and playing country and western music accompanied by her guitar and son David.  Her musical highlights include placing second on the Cotton Seed Clark TV talent show in Sacramento and being asked by talent scouts to audition for Buck Owens in the 1960s.

In lieu of flowers, donations may be made to the American Lung Association.