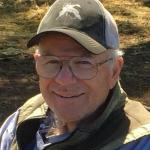 Russell was the first child of Ward Cairns and Frances Owens Russell.  He was born in Berkeley, on Aug. 8, 1936.  He attended schools in Berkeley and graduated from Berkeley High School in 1954. He majored in industrial engineering at San Jose State. He left before graduation to enlist in the U.S. Army and served in Germany from 1959-1962 where he worked on tanks and honed his skills as a machinist. After his service he was employed as a mechanical technician in the Nuclear Test Engineering Division at Lawrence Livermore Laboratory for 30 years. He met Marilyn in 1965 at the Oakland Airport on a research project studying burrowing owls.  They were married on June 3,1967 and had 54 amazing years together.

He was preceded in death by his parents and sister, Carol Warshauer.

There will be no services. However, a celebration of life will be planned in springtime. His cremains will be placed at the Memorial Rock on the ranch in a private ceremony.

In lieu of flowers, donations may be made to: California Waterfowl Association, Ducks Unlimited, Mule Deer Foundation, Parkinson's Foundation, California Rangeland Trust, Hope Hospice or charity of your choice.