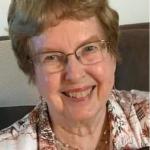 Higby was born on June 19, 1938, to John & Viola McCrary in Rock Chapel, Georgia.  She moved to Livermore where she attended elementary school. She attended middle school in a barracks at the Naval Air Station which is now known as Lawrence Livermore National Laboratory.  She graduated from Livermore High School in 1956. During her junior year at LHS she met the love of her life Lloyd Higby. They were married 50 years. She worked for over 30 years at Lawrence Livermore National Laboratory. Most of those years were spent in the vault as a classified report librarian.

In lieu of flowers donations can be made in her memory to the Cancer Society, Livermore VFW Post 7265, Pets & Pals of Lathrop, or your favorite charity.