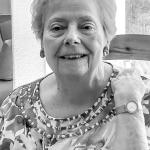 Cupps was born in Gallup, New Mexico, on June 12, 1934, the youngest of four daughters born to Richard Lang King and Mary Biffle King. She spent her childhood in Gallup, New Mexico, and Durango, Colorado, before moving with her family to Herlong, California, where she attended high school. She studied chemistry at the University of Nevada. It was in Reno that she met and married her husband Frank (Jerry). After living in New York City for two years, they moved to Livermore where they raised four children. She enjoyed a 25-year career as an analytical chemist at Livermore Lawrence National Laboratory.

She was a voracious reader and had an innate curiosity that was apparent from an early age She loved music and the arts and was a season subscriber and patron to the San Francisco Opera, Ashland Shakespeare Festival and San Francisco Symphony. In retirement, she enjoyed traveling, taking in museums, architecture and other points of interest in countries around the world.