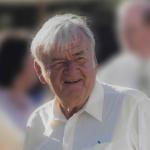 Doggett was born in Santa Rosa to William and Thelma Doggett. He spent his youth in Santa Rosa, San Francisco, Walnut Creek, and San Anselmo, where he graduated from Tamalpais High School. Following high school, Jim went to community college and then to University of California Berkeley, where he met Muriel Kazerman, whom he would eventually marry. He served in the U.S. Army in Texas, Alabama, and New York, during the Korean War. When he finished his enlistment, the family returned to California so he could complete a bachelor’s degree in agricultural engineering at University of California Davis.

He began his career working for FMC designing incubators, egg washers and grapefruit segmenting machines. He left FMC to work at what was then the Lawrence Radiation Laboratory and the family moved to Livermore in 1962. He was one of the founding members of the A-Crew, a group that provided labor, design, and building skills for countless community projects including the refurbishment of Livermore Area Recreation and Park District’s Barn, the Livermore Cultural Arts Festival, and Livermore Art Association shows.  At Lawrence Livermore National Laboratory, he left agricultural engineering for mechanical engineering, supporting a virtual alphabet of energy-related projects from MFTF-B to ITER, the International Fusion Research Project for which he was the U.S. lead engineer at the time of his retirement.

There will be a celebration of life on Saturday, April 30 at 11:30 a.m.at 2926 Edwards Lane Livermore. Please come and share stories and we will lift a glass to a life well lived.