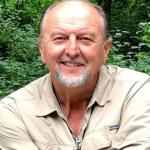 Parkinson was born in 1949 in Monongahela, Pennsylvania.  He enlisted in the U.S. Air Force and served four years as a jet engine mechanic, including one year serving in Vietnam. He spent 10 years working at Lawrence Livermore National Laboratory. In 1985 he transitioned to the east coast as one of the first mechanical technicians hired at Thomas Jefferson National Accelerator Facility in Newport News, Virginia where he worked for 25 years.